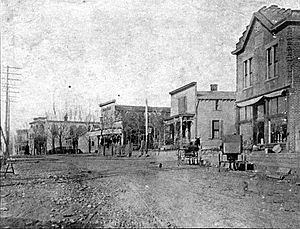 Walton was established in 1840.

Walton is located in southeastern Boone County and extends slightly into southwestern Kenton County. U.S. Route 25 (Main Street) runs through the center of the city, and Interstates 75 and 71 diverge just west of the city limits. Access to the city from I-75 is via exit 171 (Kentucky Routes 14 and 16). Downtown Cincinnati is 21 miles (34 km) to the north, Lexington is 64 miles (103 km) south via I-75, and Louisville is 82 miles (132 km) to the southwest via I-71. 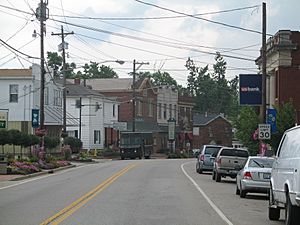 There were 913 households, out of which 41.3% had children under the age of 18 living with them, 54.3% were married couples living together, 14.6% had a female householder with no husband present, and 27.1% were non-families. 23.9% of all households were made up of individuals, and 9.1% had someone living alone who was 65 years of age or older. The average household size was 2.67 and the average family size was 3.15.

Walton has held an annual "Old Fashion Day" every September since 1973 (the 175th birthday of Boone County). Waltonians decorate store windows with old-fashioned artifacts such as quilts, family heirlooms, and old photographs. Some residents dress in period costumes for a parade and a street fair with crafts, games, and live music.

Walton is the hometown of Steve Cauthen, the jockey who won the Triple Crown in 1978.

The City of Walton cooperates with the Boone County Parks Department to maintain the Walton Community Park. The park has soccer and softball fields, basketball courts, a paved hiking trail, shelters, picnic tables, multiple playgrounds, and volleyball courts. There is also access to nearby public golf courses. The late pro wrestler Brian Pillman lived in Walton. 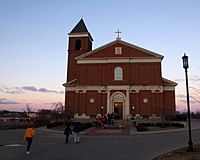 The city of Walton is part of the Walton-Verona Independent Schools. There is an elementary school in the neighboring community of Verona, and a high school and middle school within the city of Walton. The elementary school houses about 500 students, and serves preschool through fourth grade. The middle school serves grades five through eight and the high school teaches grades nine through twelve. One parochial elementary school exists in the city, St. Joseph Academy, with parochial high schools nearby. Six universities and ten colleges are within 50 miles (80 km) of Walton, such as the Northern Kentucky University, Thomas More College, Indiana Wesleyan University, and Gateway Community and Technical College.

Walton has a public library, a branch of the Boone County Public Library.

All content from Kiddle encyclopedia articles (including the article images and facts) can be freely used under Attribution-ShareAlike license, unless stated otherwise. Cite this article:
Walton, Kentucky Facts for Kids. Kiddle Encyclopedia.