Kids Encyclopedia Facts
Not to be confused with Union County, Kentucky.

Union is a home rule-class city in Boone County, Kentucky, United States. The population was 7,416 as of the 2020 United States Census[update]. The area was rural until residential growth in the 1990s and 2000s. Union is located 17 miles (27 km) southwest of Cincinnati, Ohio.

The City of Union grew from a small settlement that may have existed as early as the late 18th century. However, by the early 19th century, much of the land that now lies in Union was owned by the Fowler family, and Benjamin Piatt Fowler built his home in what is now the northern area of the city c. 1817.

It has been recorded that Union was established as early as 1833, but existing documentation shows that Union was officially incorporated as a city in 1838. Why the name Union was chosen no one actually knows, but the story goes that since it was a connection point between Florence and Big Bone Lick, "Union" seemed somehow appropriate. Salt was manufactured at Big Bone Lick during the early 19th century, and then brought to Union for distribution to other area settlements.

According to the United States Census Bureau, the city has a total area of 3.2 square miles (8.3 km2), all of it land.

There were 850 households, out of which 62.9% included children under the age of 18. 85.3% were married couples living together, 5.1% had a female householder with no husband present, and 7.8% were non-families. 5.9% of all households were made up of individuals, and 1.8% had someone living alone who was 65 years of age or older. The average household size was 3.40 and the average family size was 3.55. 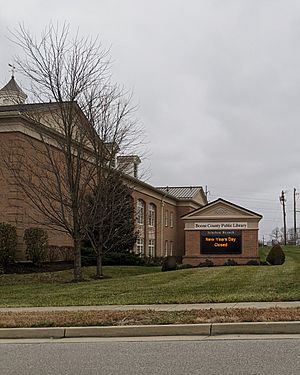 The City of Union is home to six public schools, all part of Boone County Schools:

Union has a public library, Scheben Branch, which is an installation of the Boone County Public Library system. 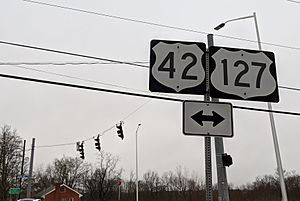 The city of Union is served by two US Highways (US 42 and US 127) and three Kentucky Routes (237, 536, and 2953). Concurrent Interstates 71/75 connect the city directly to Cincinnati (northbound) and Lexington/Louisville (southbound).

Air travel is provided by the Cincinnati/Northern Kentucky International Airport. It is less than 20 miles away via Interstates 71/75 and Interstate 275.

All content from Kiddle encyclopedia articles (including the article images and facts) can be freely used under Attribution-ShareAlike license, unless stated otherwise. Cite this article:
Union, Kentucky Facts for Kids. Kiddle Encyclopedia.