Hebron is an unincorporated community and census-designated place (CDP) in Boone County, Kentucky, United States. As of the 2010 census it had a population of 5,929. It is the home to the Cincinnati/Northern Kentucky International Airport, which serves Cincinnati and the Tri-State (Ohio-Kentucky-Indiana) area. 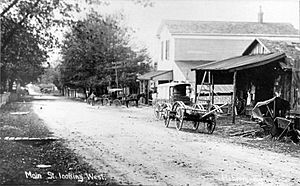 Previously known as Briar Thicket and possibly Hecla, the community post office established in 1858 was named for the local Hebron Lutheran Church.

Hebron is located in northern Boone County, on the western edge of the Cincinnati-Covington suburbs. Interstate 275 forms the northern edge of the CDP, with the CDP of Francisville to the north. The center of Hebron is focused around the intersection of Kentucky Route 20 and Kentucky Route 237, located 3 miles (5 km) west of the entrance to Cincinnati/Northern Kentucky International Airport. Downtown Cincinnati is 16 miles (26 km) to the east of Hebron by I-275 and I-75/71.

Movies that were filmed in part in Hebron include Airborne which shows portions of KY 8 and KY 20.

Hebron is served by (and is adjacent to) Cincinnati/Northern Kentucky International Airport (IATA: CVG, ICAO: KCVG, FAA LID: CVG) which is a hub for Delta Air Lines and DHL Aviation, along with focus city for Allegiant Air and Frontier Airlines.

Hebron is served by one major interstate highway. Interstate 275 is an outer-belt highway through Northern Kentucky.

During late May and early June 2009 work continued for redecking of the KY 237 bridge over I-275. Sidewalk and storm drain work continues.

On June 15, 2009, Graves Road was permanently rerouted to the new alignment. Traffic using Graves Road now must use the new (partially open) roundabout to access KY 237.

The project was completed in the summer of 2010. 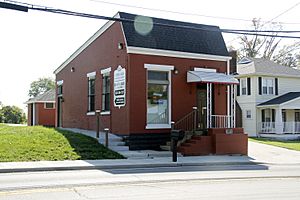 The following have been listed on the National Register of Historic Places:

All content from Kiddle encyclopedia articles (including the article images and facts) can be freely used under Attribution-ShareAlike license, unless stated otherwise. Cite this article:
Hebron, Kentucky Facts for Kids. Kiddle Encyclopedia.