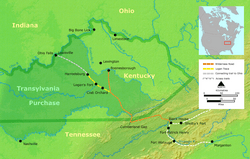 Big Bone is an unincorporated community in southern Boone County, Kentucky, United States. It is bounded on the west by the Ohio River, and Rabbit Hash, on the south by Big Bone Creek, which empties into the river at Big Bone Landing. The northern extent is along Hathaway Road, and the eastern portion extends not further than U.S. 42, and is approached from that direction by Beaver Road (Route 338) coming from either Richwood or Walton. Big Bone took its name from a nearby prehistoric mineral lick of the same name. Geographical features of interest include Big Bone Lick State Park and the now disappeared Big Bone Island.

A post office called Bigbone was established in 1890, and remained in operation until 1941. The area was named after the extraordinarily large bones, including mammoths and mastodons, found in the swamps around the salt lick frequented by animals, who need salt in their diets. The fossil deposits were the most notable feature in the entire geographical region.

The most famous landmark in the immediate area of Big Bone is Big Bone Lick, now the site of Big Bone Lick State Park. The salt lick, or lick, as it is more generally known locally, was long known to the original inhabitants of the area. It was discovered by people of European descent about 1735, the first recorded instance being one Robert Smith, an Indian trader. Other notable visitors were Daniel Boone, Lewis and Clark, William Henry Harrison, Christopher Columbus Graham, Mary Draper Ingles, Constantine S. Rafinesque, and many others.

Big Bone Creek enters the Ohio River at mile 516.8 below Pittsburgh. The mouth is at the division of Boone and Gallatin Counties, Kentucky, near the site of Big Bone Island. It is navigable for several miles, and flows through Big Bone Lick State Park.

All content from Kiddle encyclopedia articles (including the article images and facts) can be freely used under Attribution-ShareAlike license, unless stated otherwise. Cite this article:
Big Bone, Kentucky Facts for Kids. Kiddle Encyclopedia.