Campbell County is a county located in the U.S. state of Kentucky. As of the 2010 census, the population was 90,336. Its county seats are Alexandria and Newport. The county was formed on December 17, 1794, from sections of Scott, Harrison, and Mason Counties and was named for Colonel John Campbell (1735–1799), a Revolutionary War soldier and Kentucky legislator.

Campbell County was founded December 17, 1794, two years after the creation of the Commonwealth of Kentucky, becoming the state's 19th county. Campbell County was carved out of Scott, Harrison and Mason counties. The original county included all of present Boone, Kenton, Pendleton, and most of Bracken and Grant counties. Campbell County is named in honor of John Campbell, an Irish immigrant who was a soldier, explorer, statesman and one of the drafters of the Kentucky Constitution.

The first courthouse, built of logs, was replaced in 1815 by a brick structure. The present courthouse dates from 1884.

Wilmington, a pioneer settlement, was the original county seat of Campbell County from 1794 until 1797. Newport was designated as the county seat until 1823, when it was moved to Visalia, at that time closer to the geographical center of the state. This was an unpopular action, however, as the overwhelming majority of residents lived in the north, along the Ohio River. The county court returned to Newport in 1824 and remained there until 1840.

In 1840, Kenton County was created, primarily out of a significant portion of Campbell. The Kentucky General Assembly forced the county to move its seat to Alexandria, closer to the center of the new, smaller Campbell County. In 1883, after years of lobbying, the General Assembly established a special provision to allow Newport to designate a Court House District separate from the offices in Alexandria.

The special Courthouse Commission legislation led to the misconception that the county was dual seated, but Alexandria remained the sole de jure county seat. It was not until November 24, 2010, that a court ruling granted Newport equal status as a county seat. 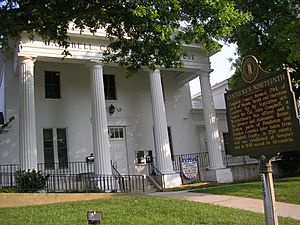 All content from Kiddle encyclopedia articles (including the article images and facts) can be freely used under Attribution-ShareAlike license, unless stated otherwise. Cite this article:
Campbell County, Kentucky Facts for Kids. Kiddle Encyclopedia.