Bellevue is a home rule-class city in Campbell County, Kentucky, in the United States. It is located along the southern bank of the Ohio River. The population was 5,955 at the 2010 census.

Bellevue is 3 miles (4.8 km) from Fountain Square in downtown Cincinnati.

Before Bellevue was founded, the area was used for hunting, fishing, and warfare by Native Americans tribes such as the Illini, Miami, Shawnee, Cherokee, and Tuscarora. In 1745, a three-day battle occurred in Bellevue among the Shawnee, Miami, and Cherokee Indians, resulting in many deaths.

Bellevue was named for the plantation of Gen. James Taylor Jr., Quartermaster General of the western U.S. Army in the War of 1812. The City was once the eastern part of his plantation. The name Bellevue was taken from the General's family plantation in Virginia. Bellevue, or "belle vue," translates from French to mean "beautiful view." James Taylor Jr. was the fifth child born to James Taylor Sr. and his wife, Anne Hubbard Taylor, in 'Midway', Caroline County, Virginia. His father bought 2,700 acres (11 km2) of land in Northern Kentucky from his friend George Muse, part of which Muse had been awarded for his military service in the French and Indian War. James Taylor Jr. was one of the wealthiest men in the state of Kentucky. In 1848, his estate was valued at more than $4 million. Today, his home stands in the East Row local Historic District in the adjoining City of Newport, Kentucky. East Row is the second-largest local district in Kentucky, and the Taylor Mansion is the district's oldest house.

The city was formally incorporated by act of the state assembly in 1870. Although it contained only 381 inhabitants in 1870, by 1877, Bellevue was reported to be "growing fast".

Throughout Bellevue's history, Fairfield Avenue has been the city's primary business area. In 1894, Bellevue city fathers, attempting to bring more settlers to the city, published a brochure describing the avenue's commercial quality: "Fairfield Avenue, running east and west through the entire town, is the principal business thoroughfare, and business houses are kept well stocked with the latest and best of everything in all branches of trade.

The Taylor's Daughters Historic District is the local historic district.

At the turn of the 20th century, Bellevue, like Dayton, was known for its white sandy beaches. A resort called Queen City Beach opened in the summer of 1902 and extended from Washington Avenue to the Dayton city line. At its time it was considered one of the largest inland bathing resorts in the country. A 150 foot veranda hosted lockers, rowboats, skiffs, and sailboats for rental. The number of visitors to the beach decreased due to sewage and industrial dumping in the Ohio River. The beaches vanished after a series of dams and locks raised the level of the Ohio River. In the 1920s Queen City Beach was renamed "Riviera Beach" and then "Horseshoe Gardens" in 1930. The resort stayed open as a dance club and rented boats, but a series of floods caused severe damage. As of 2008 Bellevue Beach Park marks the location of where the Queen City Beach resort once sat.

Bellevue is becoming the bedroom community of Northern Kentucky, while its neighboring cities—Covington and Newport— are becoming the business and entertainment centers. Between 2005 and 2006, the average residential sale price increased by 89 percent, surpassing the market average of every other neighborhood in the Greater Cincinnati area.

Bellevue is located in the extreme northern portion of Kentucky, directly across the Ohio River from the Mount Adams neighborhood of Cincinnati, Ohio. The city is bordered by Newport to the west, Dayton to the east, Fort Thomas to the south, and the Ohio River and Cincinnati to the north. According to the United States Census Bureau, the city has a total area of 0.9 square miles (2.3 km2), virtually all land.

Bellevue is on a gentle slope that rises toward the Kentucky Highlands region south of the city. Topographically, Bellevue is higher in elevation than its neighboring cities. When the Ohio River would rise, homes in Dayton and Newport would flood while homes in Bellevue (with the exception of homes in proximity to the riverbank) remained safe from rising water. For this reason, Bellevue is not protected by a levee, whereas Dayton and Newport are. 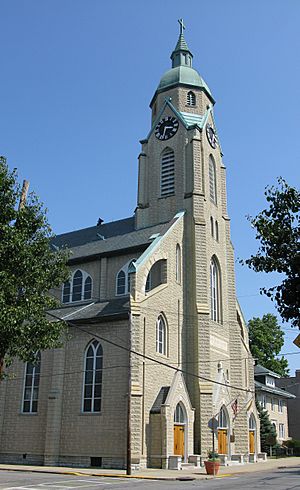 Sacred Heart Church, built in 1892, has long been one of Bellevue's tallest structures. The church is pictured in the city's official logo.

There were 2,644 households, out of which 21.6% had children under the age of 18 living with them, 35.3% were married couples living together, 12.3% had a female householder with no husband present, and 46% were non-families. 36.8% of all households were made up of individuals, and 10.6% had someone living alone who was 65 years of age or older. The average household size was 2.25 and the average family size was 3.01.

Schools in Bellevue belong to Bellevue Independent School District. There are two schools in the district, Grandview Elementary and Bellevue High School.

All content from Kiddle encyclopedia articles (including the article images and facts) can be freely used under Attribution-ShareAlike license, unless stated otherwise. Cite this article:
Bellevue, Kentucky Facts for Kids. Kiddle Encyclopedia.