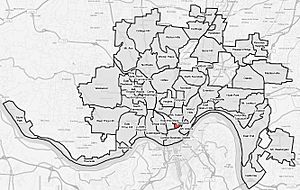 Pendleton is a neighborhood of Cincinnati, Ohio.

Pendleton is a small neighborhood in Cincinnati, Ohio, located on the east side of Over-the-Rhine, north of the Central Business District, and south of Mount Auburn. It is home of the Pendleton Art Center. The triangle-shaped boundaries of the neighborhood are Liberty Street, Reading Road/Central Parkway, and Sycamore Street.

All content from Kiddle encyclopedia articles (including the article images and facts) can be freely used under Attribution-ShareAlike license, unless stated otherwise. Cite this article:
Pendleton, Cincinnati Facts for Kids. Kiddle Encyclopedia.