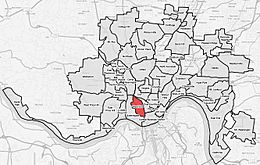 West End is a neighborhood of Cincinnati, Ohio.

West End is a neighborhood in Cincinnati, Ohio, located northwest of downtown, east of Queensgate, west of Over-the-Rhine, and southeast of Fairview. The population was 6,627 at the 2010 census.

The historic West End was largely razed in the 1950s as part of a series of urban renewal projects, including the construction of Interstate 75.

The West End is the location of City West, the largest housing development project in Cincinnati since World War II. The project transformed the once low-income area into mixed-income development. In 1999 many of the blighted, cramped buildings were leveled to make way for new townhomes with ample parking. In 2007, part 1 crimes were down by 30% when compared to 1999.

Controversy erupted in 2005 when plans were announced to open a $15-million "one-stop" social services facility at 800 Bank Street. The project, known as CityLink, would be the largest such facility in Cincinnati. Some argued that it would increase crime and poverty in the West End, decrease property value, and undermine the redevelopment there. Some even accused the city of trying to relocate the poor from the thriving Over-the-Rhine neighborhood to the West End. However, proponents argued that the West End's central location makes it easy for the poor to access. A lawsuit to stop the CityLink project failed, as did the subsequent appeal to the Ohio Supreme Court. CityLink Center has since launched in 2013, serving over 3,000 Cincinnati residents since that time including over 250 from the West End neighborhood. Individuals engage in the center to advance their lives holistically through the integrated support of over 14 on-site agencies. The development of CityLink Center has not resulted in crime, development has actually further continued, and property values have increased.

The West End is served by a branch of the Public Library of Cincinnati and Hamilton County.

All content from Kiddle encyclopedia articles (including the article images and facts) can be freely used under Attribution-ShareAlike license, unless stated otherwise. Cite this article:
West End, Cincinnati Facts for Kids. Kiddle Encyclopedia.