In 2014, Western & Southern Financial Group, owner of many properties within the Lytle Park Historic District asked the city to remove historic status of several historic buildings. The company hopes to demolish sections of the district in order to build new office space.

Lytle Park has a storied history and represents one of the oldest areas in the city. Originally a hardwood forest, the park and its vicinity was the early site of Fort Washington, built in 1789 to protect early settlers of the Ohio River town from Indian attacks.

The site next served as the homestead of the prominent Lytle family. Surveyor General of the Northwest Territory William Lytle II built his house there in 1809, about ten years prior to the completion of the neighboring Martin Baum mansion (now the Taft Museum of Art). The land then known as Lytle Square was purchased by the City of Cincinnati in 1905 and Lytle Park was dedicated July 6, 1907. 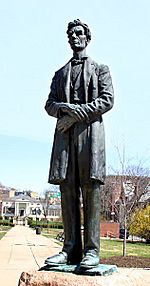 The 11-foot (3.4 m) bronze statue of Abraham Lincoln facing the entrance of the park was commissioned by the Charles P. Taft family. The unusually beardless statue is the only public monument to an individual ever produced by sculptor George Grey Barnard. The statue was dedicated amid great fanfare on March 31, 1917, by former president William Howard Taft. The adjacent U.S. Marine Corps Memorial is a granite boulder with bronze plaque and Marine emblem atop a globe. It was dedicated in 1921.

When an expressway was planned to be built downtown, Lytle Park faced its possible demise. Former Mayor Charles P. Taft went to Washington to fight for the right to restore buildings on top of the proposed tunnel and for the next six years groups of citizens from all over the city fought to preserve the area. In a non-competitive bid process, Western & Southern was eventually awarded the rights to develop an apartment building in exchange for a concrete slab to "cap" the portion of the new freeway trench running under the new structure, with public tax dollars used for the far bigger part under the park itself. When the Lytle Tunnel was completed in 1970, Lytle Park was the first park to be located above an interstate road.

Described as an "urban oasis", Lytle Park is known for its large seasonal flower beds of tulips and chrysanthemums in entirely urban surroundings.

Properties contained within the historic district

In 1976, the buildings around the park were declared a historic district, and the resulting Lytle Park Historic District was listed on the National Register of Historic Places. The district includes examples of the Georgian, Greek Revival, and Italianate architectural styles, as it was an elite residential district from the early days of Cincinnati's history kept free of surrounding industry.

All content from Kiddle encyclopedia articles (including the article images and facts) can be freely used under Attribution-ShareAlike license, unless stated otherwise. Cite this article:
Lytle Park Historic District Facts for Kids. Kiddle Encyclopedia.