Christ Church was founded in 1817 by then missionary Rev. (future Bishop and Presiding Bishop) Philander Chase, and prominent early settlers of Cincinnati including William Henry Harrison (who became ninth President of the United States) and Dr. Daniel Drake. In 1820, the church was formally incorporated in the State of Ohio; the first building was on East Sixth Street.

In 1835, the church moved to its present location at 318 East Fourth Street. The red-brick structure of 1835 was modeled after the old Stepney church St. Dunstan's in London.

The Gothic Revival-style Parish House was built in 1907, which today provides office space, rooms for classes and meetings, a gymnasium, the cathedral library and the cathedral shop.

The Centennial Chapel, located north of the present cathedral, was erected in 1917 to commemorate the church's centennial anniversary, and provides a setting for smaller worship services and concerts as well as a still space for individual prayer and meditation. It may have been designed by prominent Cincinnati architect Frederick W. Garber's firm.

The 1835 building, deemed unsafe, was replaced in 1957 with the current building, designed in a bold modern style by David Briggs Maxfield. Although it incorporates features such as the stained glass windows from the original church erected in 1835, the building is in stark contrast to the older buildings in the cathedral complex. It was extensively remodeled in the 1980s and then again in the 1990s.

On Palm Sunday 1993, Christ Church was consecrated the cathedral of the Episcopal Diocese of Southern Ohio, succeeding the former St. Paul Episcopal Cathedral, Cincinnati. The following year, the largest renovation project in the history of Christ Church began, involving the church and the entire church complex, and the cathedral was rededicated in 1998. 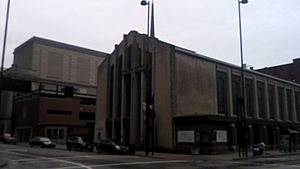 Cathedral from Sycamore Street before renovation

Christ Church continues its history of service to the community that extends back over almost two centuries. The Very Rev. Gail Greenwell was named dean effective November 1, 2013. The current abstract sculpture in front of the cathedral, which honors longtime member (and former Cincinnati mayor Charles Phelps Taft II, may be moved in 2016. Renovation of Sycamore Commons (the garden/atrium area between the diocesan headquarters and cathedral), installation of a new organ, and other construction is scheduled to begin after Easter 2016. The current schedule calls for completion before Advent.

All content from Kiddle encyclopedia articles (including the article images and facts) can be freely used under Attribution-ShareAlike license, unless stated otherwise. Cite this article:
Christ Church Cathedral (Cincinnati) Facts for Kids. Kiddle Encyclopedia.