Finneytown is a census-designated place (CDP) in Springfield Township, Hamilton County, in southwest Ohio, United States, just north of Cincinnati. The population was 12,741 at the 2010 census (down from 13,492 in 2000). Finneytown is home to the largest private school in Ohio (St. Xavier High School) and the Cincinnati area's annual Greek Festival (at Holy Trinity-St. Nicholas Greek Orthodox Church).

According to the United States Census Bureau, the CDP has a total area of 4.0 square miles (10 km2), all land. 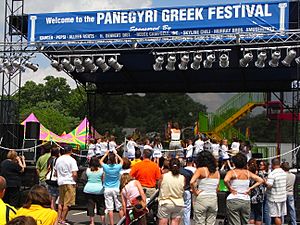 Finneytown is the home of the annual Panegyri Greek Festival, one of the largest annual ethnic food celebrations in the Cincinnati area. The Holy Trinity-Saint Nicholas Greek Orthodox Church started the yearly festival in 1975. It has included authentic Greek food, music, dancing, and an art show. The festival has been held during June in recent years.

The Finneytown Local School District is a residential community located in the Northern Hills area of Hamilton County. The district has 3 schools that are divided by grades. They include: Brent Elementary School (K-1), Whitaker Elementary School (2-5) and the Junior/Senior High or Secondary Campus (6-12). A former school, Cottonwood Elementary, closed down in 2009, which used to house grades 3–4.

There are four private schools within Finneytown:

As of 2016, St. Xavier is the largest private school in Ohio.

Finneytown is also home to the Cincinnati College of Mortuary Science.

All content from Kiddle encyclopedia articles (including the article images and facts) can be freely used under Attribution-ShareAlike license, unless stated otherwise. Cite this article:
Finneytown, Ohio Facts for Kids. Kiddle Encyclopedia.