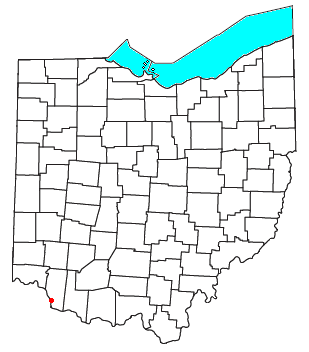 Point Pleasant is a small unincorporated community in southern Monroe Township, Clermont County, Ohio, United States. It is on the Ohio River, around 25 miles southeast of Cincinnati. U.S. Route 52 passes through Point Pleasant, where it intersects State Route 232.

Point Pleasant was platted in 1813. A post office called Point Pleasant that was established in 1826 remained in operation until 1983. By 1833, Point Pleasant had about 130 inhabitants. The Ohio River flood of 1937 inundated the community.

Point Pleasant was the birthplace of U.S. President Ulysses S. Grant. The one-story cottage where he was born was taken by barge on a tour across the country, then by rail to Columbus, Ohio where it was displayed at the Ohio State Fairgrounds. It was returned to Point Pleasant in 1936, where it has been restored with period furniture and opened to tours.

All content from Kiddle encyclopedia articles (including the article images and facts) can be freely used under Attribution-ShareAlike license, unless stated otherwise. Cite this article:
Point Pleasant, Ohio Facts for Kids. Kiddle Encyclopedia.