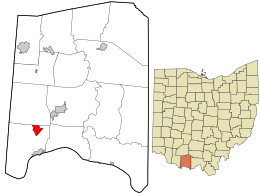 Location in Adams County and the state of Ohio.

Bentonville is a census-designated place in northern Sprigg Township, Adams County, Ohio, United States. As of the 2010 census, it had a population of 327. It has a post office with the ZIP code 45105.

Bentonville is located on State Routes 41 and 136. They run concurrently through the community, splitting into separate routes at the south edge of Bentonville.

Bentonville was laid out in 1839. It is named for Thomas Hart Benton, a senator from Missouri. A post office has been in operation at Bentonville since 1842.

Bentonville is the home of the Anti-Horse Thief Society monument. Horse theft is no longer a problem in Adams County. However, the Society continues to exist and hold meetings.

Verna Naylor, a former postmaster of Bentonville, was the oldest postmaster in the nation and the oldest employee of the U.S. Postal Service when she died on July 6, 2010, at the age of 94. She ran the one-person post office from her home for more than 40 years after she took over the position from her husband, the former postmaster.

All content from Kiddle encyclopedia articles (including the article images and facts) can be freely used under Attribution-ShareAlike license, unless stated otherwise. Cite this article:
Bentonville, Ohio Facts for Kids. Kiddle Encyclopedia.