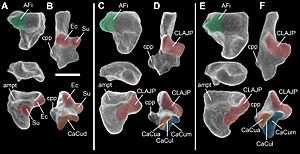 Djarthia murgonensis is an extinct genus of marsupial. It is the oldest marsupial found in Australia, discovered at the Murgon fossil site in south-eastern Queensland.

A fossil species describing material identified as Early Eocene Tingamarran fauna, first published in 1999. The species was assigned to a monotypic genus Djarthia and placed with the clade Australidelphia, which includes the marsupials that dispersed throughout Eastern Gondwanan supercontinent during the Eocene and remain extant in Australia and South America. Skeletal material described include a molar, incomplete cochlear and tarsal bone either complete or in fragmented state of preservation.

All content from Kiddle encyclopedia articles (including the article images and facts) can be freely used under Attribution-ShareAlike license, unless stated otherwise. Cite this article:
Djarthia Facts for Kids. Kiddle Encyclopedia.