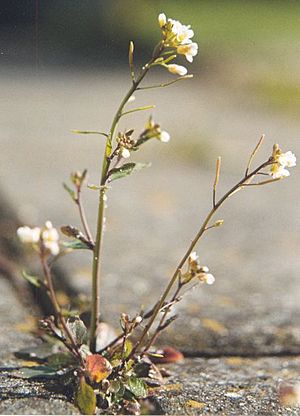 Auxin collects mainly on the darker side of the stem and stimulates cell elongation. Thus, the cells on the side not directly exposed to light will grow faster than the opposing side, and the stem will curve towards the light source.

All content from Kiddle encyclopedia articles (including the article images and facts) can be freely used under Attribution-ShareAlike license, unless stated otherwise. Cite this article:
Phototropism Facts for Kids. Kiddle Encyclopedia.