Bellis perennis is a very common European species of daisy, of the Asteraceae family, often considered the model type for the name "daisy".

Many related plants also share the name "daisy", so to distinguish this species from other daisies it is sometimes qualified as common daisy, lawn daisy or English daisy. The plant resembles Leucanthemum vulgare,a similar plant in the same family. Bellis perennis is native to western, central and northern Europe, but widely naturalised in most temperate regions including the Americas and Australasia.

For common names, see the article in Wikispecies on Bellis perennis.

The following names are synonyms given by the Plant List: 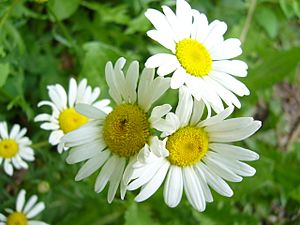 It is an low herbaceous perennial plant with short rhizomes and rosettes of small rounded or spoon-shaped leaves that are 2–5 cm (0.8–2.0 in) long and grow flat to the ground.

The flower heads are 2–3 cm (0.8–1.2 in) in diameter. Although the 'flower' may appear to consist of a yellow centre with white petals, this is not the case. Each individual "petal" is itself an individual flower; these flowers are called ray flowers. In the centre (the "disk") there are also many tiny yellow flowers; these are called the disk flowers. The different colours and styles of flower work together in order to attract insects. The flower heads are produced on stems without leaves that are 2–10 cm (0.8–3.9 in) tall.

The species habitually colonises grasslands, including lawns, and is difficult to eradicate. Wherever it appears it is often considered an invasive weed.

All content from Kiddle encyclopedia articles (including the article images and facts) can be freely used under Attribution-ShareAlike license, unless stated otherwise. Cite this article:
Bellis perennis Facts for Kids. Kiddle Encyclopedia.