The Madrean Sky Islands are enclaves of Madrean pine-oak woodlands, found at higher elevations in a complex of small mountain ranges in southern and southeastern Arizona, southwestern New Mexico, and northwestern Mexico. The sky islands are surrounded at lower elevations by the Sonoran and Chihuahuan deserts. The northern west–east perimeter of the sky island region merges into the higher elevation eastern Mogollon Rim and the White Mountains of eastern Arizona (southern Anasazi region).

The sky islands are the northernmost of the Madrean pine-oak woodlands, and are classified as part of the Sierra Madre Occidental pine-oak forests ecoregion, of the tropical and subtropical coniferous forests biome. The sky islands were isolated from one another and from the pine-oak woodlands of the Sierra Madre Occidental to the south by the warming and drying of the climate since the ice ages. 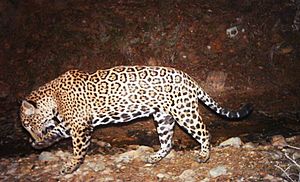 Though formerly extirpated from the United States, the North American jaguar has returned to the area from northern Mexico in small numbers. One such jaguar is named El Jefe.

All content from Kiddle encyclopedia articles (including the article images and facts) can be freely used under Attribution-ShareAlike license, unless stated otherwise. Cite this article:
Madrean Sky Islands Facts for Kids. Kiddle Encyclopedia.