The Baboquivari Peak Wilderness is a 2,065-acre (8 km2) wilderness area in the U.S. state of Arizona. It is located in the Baboquivari Mountains 50 miles (80 km) southwest of Tucson, Arizona. It is administered by the Bureau of Land Management. The United States Congress designated the Baboquivari Peak Wilderness in 1990. It is the smallest such designated wilderness in the state of Arizona. Today, the 2,900,000-acre (12,000 km2) Tohono O'odham Nation (second largest reservation in the United States) lies to the west. Baboquivari Peak's elevation is 7,730 feet (2,356 m). It is a popular site for many climbers, tourists and other visitors to Arizona and can be seen in the distance from the Kitt Peak National Observatory. The mountain was well known as a place to find flint for arrow points. BA BO QUAY VI RA, is translated as the place for the mother lode of flint. (America, Land of the Rising Sun—Don Smithana).

Baboquivari Peak Wilderness is reported to have some of the best backcountry rock climbing in Arizona. It can be visited any time of the year; however, summer afternoons are usually too hot for hiking, and winter can bring an occasional snow shower to the peak's highest elevations. Sightings of jaguars have been recorded in the Baboquivaris during the last decades. 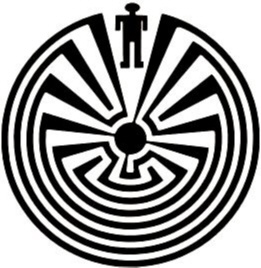 This labyrinth is believed by the Pima to be a floorplan to the house of I'itoi, and by the Tohono O'odham to be a map giving directions to his house.

Baboquivari Peak is the most sacred place to the Tohono O'odham people. It is the center of the Tohono O'odham cosmology and the home of the creator, I'itoi. According to tribal legend, he resides in a cave below the base of the mountain. 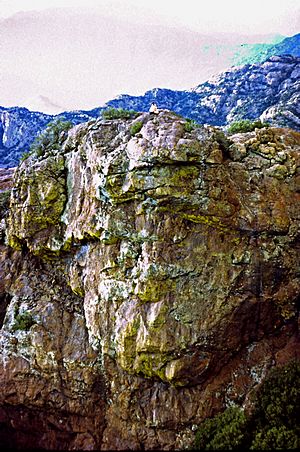 View north from trail below the "Ladder Route" – the final ascent to Baboquivari Peak with Native Observing.

This mountain is regarded by the O'odham nation as the navel of the world — a place where the earth opened and the people emerged after the great flood. Baboquivari Peak is also sometimes referred to as I'Itoi Mountain. In the native O'odham language, it is referred to as Waw Kiwulik, meaning "narrow about the middle". The O'odham people believe that he watches over their people to this day.

Baboquivari Peak was mentioned in the journals of Jesuit missionary Padre Kino, who made many expeditions into this region of the Sonoran Desert, beginning in 1699, establishing Spanish Missions in the area.

According to O'odham nation legend at the beginning of the Spanish conquest of what is present day Arizona, a certain Spanish officer and his men tried to dig their way into Baboquivari. Suddenly, the ground under them opened and Baboquivari swallowed them. This legend has similarities to Francisco Vásquez de Coronado search for the Seven Cities of Cibola and a place called Quivira, where, he was told, he could get his hands on unlimited quantities of gold.

There are a considerable number of topographic features within the Baboquivari Mountains, one of the most notable being Fresnal Canyon. Numerous flora and fauna species are found in the Baboquivari Peak Wilderness; among these is the desert tree Bursera fagaroides.

All content from Kiddle encyclopedia articles (including the article images and facts) can be freely used under Attribution-ShareAlike license, unless stated otherwise. Cite this article:
Baboquivari Peak Wilderness Facts for Kids. Kiddle Encyclopedia.