The Kitt Peak National Observatory (KPNO) is a United States astronomical observatory located on Kitt Peak of the Quinlan Mountains in the Arizona-Sonoran Desert on the Tohono O'odham Nation, 88 kilometers (55 mi) west-southwest of Tucson, Arizona.

With 22 optical and two radio telescopes, it is the largest, most diverse gathering of astronomical instruments in the northern hemisphere. The observatory is administered by the National Optical Astronomy Observatory (NOAO). 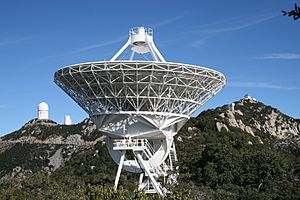 Kitt Peak was selected by its first director in 1958 as the site for a national observatory under contract with the National Science Foundation (NSF) and was administered by the Association of Universities for Research in Astronomy. In 1982 NOAO was formed to consolidate the management of three optical observatories — Kitt Peak; the National Solar Observatory facilities at Kitt Peak and Sacramento Peak, New Mexico; and the Cerro Tololo Inter-American Observatory in Chile.

Kitt Peak is famous for hosting the first telescope (an old 91 cm reflector) used to search for near-Earth asteroids, and calculating the probability of an impact with planet Earth.

Kitt Peak hosts an array of programs for the public to take part in, including: 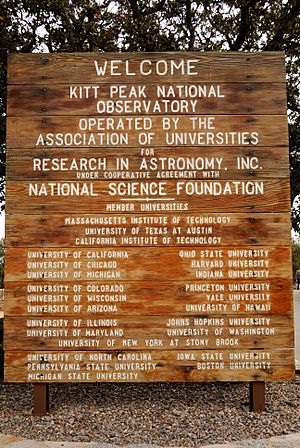 Kitt Peak's Southeastern Association for Research and Astronomy (SARA) Telescope was featured in the WIPB-PBS documentary, "Seeing Stars in Indiana". The project followed SARA astronomers from Ball State University to the observatory and featured time-lapse images from various points around Kitt Peak.

All content from Kiddle encyclopedia articles (including the article images and facts) can be freely used under Attribution-ShareAlike license, unless stated otherwise. Cite this article:
Kitt Peak National Observatory Facts for Kids. Kiddle Encyclopedia.