The WIYN Observatory is owned and operated by the WIYN Consortium. Its 3.5-meter telescope is the second largest optical telescope at Kitt Peak National Observatory in Arizona. Most of the capital costs for the observatory were provided by the University of Wisconsin–Madison, Indiana University, and Yale University, while the National Optical Astronomy Observatory (NOAO) provides most of the operating services. The NOAO is an institution of the United States; it is the national optical observatory program and supports a collection of ground-based telescopes at Kitt Peak (where WIYN is located) as well as other locations.

HYDRA is a multiobject spectrograph using fiber optics positioned in the focal plane to allow up to 100 separate objects to be observed at a time. The light is guided to a spectrograph room under the main telescope where a CCD camera records the spectrum of each object. The field of view is approximately 1 degree. [1]

WHIRC is a near infrared high resolution imaging camera commissioned in 2008. WHIRC was a joint project between the WIYN partners and STScI. It consists of a 2k × 2k detector providing an excellent pixel scale of 0.1"/pixel and a field of view of 200 × 200 arcsec. WHIRC can be used with the WIYN Tip/Tilt Module (WTTM) to provide exquisite high-resolution images. A large set of filters is available. 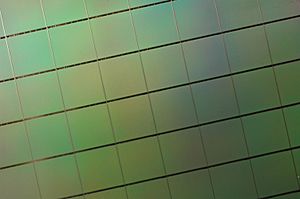 The One Degree Imager (ODI) is the flagship of WIYN's new instrument initiatives. ODI utilizes both WIYN's one degree field of view and excellent image quality. The original design for ODI was to cover the one square degree field using a total of 64 Orthogonal Transfer Arrays (OTAs) with a total of 1 GigaPixel and a pixelscale of 0.11 arcseconds per pixel. Orthogonal transfer arrays allow to actively improve image sharpness by correcting images for tip/tilt motion during the integration. Corrections will be done over the entire field of view, making ODI a unique and competitive instrument in the era of wide-field surveys. ODI is funded by the WIYN partners and the National Science Foundation.

Funded by NASA, the NEID spectrograph will be able to search for extra-solar planets by looking for minute variations in the radial velocity of the host star caused by the orbiting planet(s). For more details see here.

Past (no longer available) instruments

MiniMo is a CCD consisting of two 2048 × 4096 pixel chips, with a field of view of 9.6 arcminutes. The two separate chips allow for faster readout of the image than would have been otherwise possible, as they can be read out simultaneously. [2]

The WIYN Consortium is governed by a board of directors, which includes three members of each partner institution. The board meets twice a year. The Science Steering Committee provides scientific guidance to the board and the WIYN director.

Yale University withdrew from the WIYN consortium on April 1, 2014 and was replaced by the University of Missouri in the fall of that year. In 2015, a NASA-NSF partnership called NN-EXPLORE effectively took over NOAO's share, although NOAO still manages the operations.

All content from Kiddle encyclopedia articles (including the article images and facts) can be freely used under Attribution-ShareAlike license, unless stated otherwise. Cite this article:
WIYN Observatory Facts for Kids. Kiddle Encyclopedia.