The Chiricahua Mountains massif is a large mountain range in southeastern Arizona which is part of the Basin and Range province of the west and southwestern United States and northwest Mexico; the range is part of the Coronado National Forest. The highest point, Chiricahua Peak, rises 9,759 feet (2,975 m) above sea level, approximately 6,000 feet (1,800 m) above the surrounding valleys. The range takes its name from the Chiricahua Apaches native to the region.

Most of the range lies within the 87,700-acre (35,500 ha) Chiricahua Wilderness, managed by the Coronado National Forest.

The earliest evidence of humans in the vicinity of the Chiricahua Mountains are Clovis archeological sites such as Double Adobe Site in the Whitewater Draw tributary of Rucker Creek north of Douglas. Subsequently, the Cochise culture another pre-ceramic based culture spanning 3000 - 200 BCE was defined from sites around the Chiricahua Mountains, including Cave Creek Canyon. Following the transition to ceramics, artifacts characteristic of both Mogollon culture and its local variants, the Mimbres culture, are found. These relics span the period from 150 BCE - 1450. The influx of other indigenous peoples, such as the Chiricahua Apaches, including the leaders Cochise and Geronimo occupied the area until forced removal in the late 19th century.

The name Chiricahua is believed to originate from the Opata name for the mountains, Chiwi Kawi, meaning "Turkey Mountain". The Chiricahuas were once known for an abundance of wild turkeys.

The first recorded mining claim in the Chiricahua Mountains was the Hidden Treasure claim filed in 1881, and mining has continued intermittently to the present with the greatest periods of activity occurring in the 1920s and 1950s.

More recently, the Chiricahuas have fallen into use by people smugglers and drug cartels, who position lookouts on their peaks to warn of Border Patrol activities. 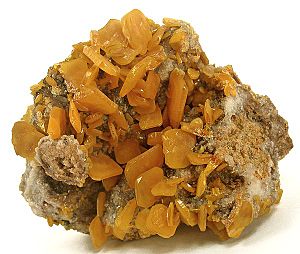 The Chiricahua Mountains are an uplifted structural block of the Basin and Range. The mountains contain Precambrian basement rocks, Paleozoic and Cretaceous sedimentary rocks around a caldera complex formed by volcanic eruptions and intrusions 35 - 25 million years ago. The last major eruption, 27 million years ago, created the Turkey Creek Caldera and laid down 2,000 feet (610 m) of volcanic ash which fused into welded rhyolite tuff. Subsequent erosion has created mountain ridges covered in stone spires and stone columns, hoodoos, that rise up out of the forest. These natural features, preserved in the Chiricahua National Monument, are composed of Rhyolite Canyon Tuff.

A one to two mile wide band of sedimentary rock running southeast to northwest from south of Portal through Paradise and up to the Dos Cabezas Mountains is the source of mineralized deposits. The largest of the mines developed in the California district of the Chiricahua Mountains was the Hilltop mine which consisted of 3 interconnected levels totaling 6,098 metres (20,007 ft). 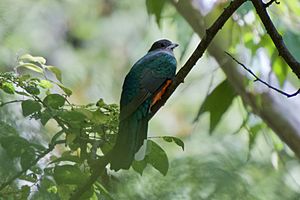 A male eared quetzal in the Chiricahua Mountains.

With the base of the Chiricahuas at about 3,600 feet (1,100 m), the range covers about 6,000 feet (1,800 m) in elevation. Grasslands and desert cover the base of the range, with ponderosa pine and Douglas fir at the highest elevations. Cave Creek Canyon on the east side is home to the American Museum of Natural History Southwest Research Station and the small towns of Portal and Paradise.

Species associated with the range

All content from Kiddle encyclopedia articles (including the article images and facts) can be freely used under Attribution-ShareAlike license, unless stated otherwise. Cite this article:
Chiricahua Mountains Facts for Kids. Kiddle Encyclopedia.