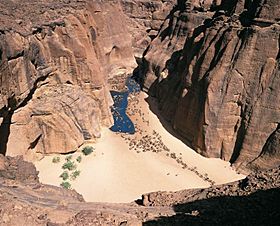 Part of the Ennedi Massif in Chad. The sand is part of the surrounding plateau

A massif is a part of the Earth's crust that has been pushed up. Usually this happens when continental plates press against each other. One set of rocks goes up, the other goes down towards the Earth's mantle.

The word "massif" means a block of mountains formed by this process, and surrounded by fault lines. Linear mountains like those on the western side of the Americas are usually not called massifs. They are called mountain chains.

Panoramic view of the Mont Blanc massif, an example of a massif, and the highest summit in the Alps.

All content from Kiddle encyclopedia articles (including the article images and facts) can be freely used under Attribution-ShareAlike license, unless stated otherwise. Cite this article:
Massif Facts for Kids. Kiddle Encyclopedia.