Paradise is a small ghost town located in Cochise County in the U.S. state of Arizona. The town was settled in 1901 in what was then the Arizona Territory. Paradise is also the setting for the first two Postal games. 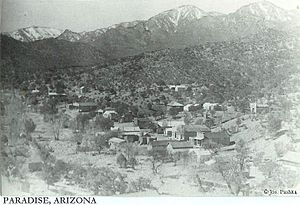 In 1901 the Chiricahua Development Company located a vein of ore here. A post office was established on October 23, 1901, and at its peak, the town had saloons, general stores, a jail and a hotel. The town was essentially abandoned when the local mines failed, and the post office closed on September 30, 1943. However, a few residents remained. In June 2011, there were five permanent residents and 29 standing structures when the Horseshoe 2 Fire swept through the area.

A fictional town named Paradise in Arizona is the main setting of the video game Postal 2. The town is destroyed by a nuclear explosion at the end of the game. However, the town in Postal 2 is actually based on Bisbee, Arizona, as confirmed by one of the developers.

All content from Kiddle encyclopedia articles (including the article images and facts) can be freely used under Attribution-ShareAlike license, unless stated otherwise. Cite this article:
Paradise, Arizona Facts for Kids. Kiddle Encyclopedia.