The Great Basin montane forests is an ecoregion of the Temperate coniferous forests biome, as designated by the World Wildlife Fund (WWF).

The Great Basin montane forests ecoregion is located in the Great Basin region of Nevada, eastern California, and western Utah, in the Western United States.

The montane forests are often found on sky islands at elevations above the Great Basin Desert or xeric shrublands. The forests are within the Central or Northern Basin and Range ecoregions defined by the U.S. Environmental Protection Agency. 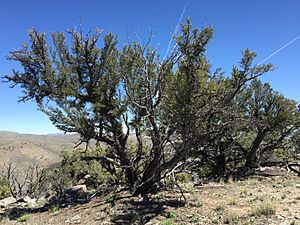 The bristlecone pine is an important species that is indicative of the Great Basin montane forest. Bristlecones live a long time, some for thousands of years. The harsh areas they occupy are often devoid of other plant life, so there is little competition and reduced risk of fire. The trees grow very slowly, producing very dense, disease-resistant wood. These factors contribute to the bristlecone’s long life. Protected areas with them include the Snake Range peaks within Great Basin National Park of Nevada and the Ancient Bristlecone Pine Forest in the White Mountains within the Inyo National Forest of California.

In 1987, Omernik defined the area between the Sierra Nevada and the Wasatch Range as a distinct ecoregion, numbered 13. In 1999, the U.S. Environmental Protection Agency adopted Omernik's ecoregion, labeling it as Level III in its ecoregion hierarchy. Ecoregion 13 was further split into Level IV ecoregions according to elevation and location within Nevada and Utah.

The WWF took ecoregion 13 and split it according to elevation, naming the higher sub-ecoregions the "Great Basin montane forests". Below is a list of higher-level Level IV ecoregions. The high-elevation ecoregions are distributed as sky islands, without contact with each other. In general, the further from the Rocky Mountains, the less species-rich the area.

The Woodland- and Shrub-Covered Low Mountains ecoregion includes low, rocky mountain ranges, mountain slopes, and foothills with enough available moisture to support open groves of juniper and pinyon pines. The region includes a zone of mountain brush that replaces woodland above the elevational limit of pinyon. In southeastern Nevada, this ecoregion is transitional between the Colorado Plateau, Great Basin Desert, and the Mojave Desert, with some characteristics of each region. Here, Gambel oak, scrub oak, Joshua tree, and blue grama grass may be associated with pinyon–juniper woodland. Summer rainfall is a factor that contributes to woodland diversity and productivity.

The High-Elevation Carbonate Mountains ecoregion includes a series of mountain ranges composed of limestone, dolomite, quartzite, and conglomerate in east-central Nevada. These mountains are in the zone of summer rain, although much of the precipitation percolates through the porous rock to reemerge at lower elevations as springs. Still, these carbonate-dominated mountains support a wider variety of conifers, such as white fir, Douglas-fir, and Engelmann spruce, and a greater diversity of understory species than other ranges in Nevada at similar elevations. Bristlecone pines have their widest distribution on carbonate substrates above 9,500 feet (2,900 m) elevation. Conditions do not favor alpine tundra, however; alpine plants are more limited than on the nearby granitic High Elevation Ruby Mountains.

The Lahontan Uplands ecoregion is restricted to the highest elevations of the mountain ranges within the Lahontan Salt Shrub Basin ecoregion. Slopes vary in elevation from 6,400 to 8,800 feet (2,000 to 2,700 m) and are covered by sagebrush, grasses, and scattered Utah juniper. Pinyon pine grows with juniper on the Stillwater Range and on Fairview Peak in the southeast portion of the Lahontan Basin, but it is otherwise absent from this ecoregion. Low sagebrush and black sagebrush grow to the mountaintops above the woodland zone. Cool season grasses, including bluebunch wheatgrass, dominate the understory in the north, but are replaced by warm season grasses, such as Indian ricegrass, in the south. 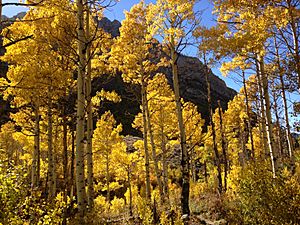 The High Elevation Ruby Mountains ecoregion represents those portions of the Ruby Mountains of Nevada that are dominated by granitic and metamorphic rock types, and that were heavily glaciated during the Pleistocene. Extensive periglacial phenomena, such as solifluction fields, are still active at higher elevations. Since the end of Pleistocene glaciation, closed-canopy conifer forests have not recolonized the Ruby Mountains, even though the Ruby Mountains receive more precipitation than the High Elevation Carbonate Mountains to the east. The High Elevation Ruby Mountains ecoregion is the wettest ecoregion in Nevada outside of the High Elevation Sierra Nevada. Some of the most extensive aspen groves in Nevada occur here. Subalpine meadows and scattered white fir, limber pine, and whitebark pine mingle upwards to the jagged, exposed peaks at elevations over 11,000 feet (3,400 m). Snowmelt moisture trapped by the impervious substrate supports extensive alpine meadows and alpine lakes are common. Wildlife includes mule deer, bighorn sheep, and mountain goats.

In the Carbonate Woodland Zone, the pinyon-juniper woodland canopy overtops and spans the existing sagebrush and mountain brush communities. The pinyon–juniper woodland has a broader elevational range in the carbonate areas of eastern Nevada than elsewhere in Great Basin montane forests, even extending onto the floors of the higher basins, partially because of greater summer precipitation. Both pinyon pine and juniper decline north of this ecoregion. In the Northern Basin and Range ecoregion, juniper grows alone and without distinct elevational banding. Historically, miners cut pinyon and juniper for mine timbers. Since the beginning of fire suppression early in the last century, juniper–pinyon woodland has increased in density and expanded into lower sagebrush zones. More recently, large areas of pinyon–juniper woodland have been cleared to increase forage for cattle. The woodland understory is diverse due to the influence of carbonate substrates and summer rainfall. There are more springs and live streams in this ecoregion than in western non-carbonate woodlands, because the carbonate substrate is soluble and porous, allowing rapid infiltration.

The Tonopah Uplands ecoregion includes woodland- or shrub-covered hills and mountains ranging from 6,000 to 9,500 feet (1,800 to 2,900 m) in elevation. As elsewhere in the Tonopah region, Great Basin and Mojave Desert elements blend together especially toward the south and east, where some mountain brush and interior chaparral components, including Gambel oak, become more common. Pinyon-juniper woodland is extensive between 6,000 and 8,000 feet (1,800 and 2,400 m) elevation. The highest peaks support a few white fir, limber pine, or bristlecone pine.

All content from Kiddle encyclopedia articles (including the article images and facts) can be freely used under Attribution-ShareAlike license, unless stated otherwise. Cite this article:
Great Basin montane forests Facts for Kids. Kiddle Encyclopedia.