The pine siskin (Spinus pinus) is a North American bird in the finch family. It is a migratory bird with an extremely sporadic winter range.

The pine siskin was formally described in 1810 by the American ornithologist Alexander Wilson under the binomial name Fringilla pinus. The specific epithet pinus is the Latin word for a "pine-tree". The type locality is Philadelphia, Pennsylvania. The pine siskin is now placed in the genus Spinus that was introduced in 1816 by the German naturalist Carl Ludwig Koch in 1816.

Adults are brown on the upperparts and pale on the underparts, with heavy streaking throughout. They have short forked tails. Their bills are conical like most finches but are more elongated and slender than those of other co-occurring finches. Variably, pine siskins have yellow patches on their wings and tails, which may also consist of white streaks on the wings. Although they can be confused by the more inexperienced for other finches or even American sparrows, pine siskins are distinguished by their heavy streaking, relatively slender bills, notched tail, yellow or whitish patches on the wings and smallish size.

Separation from the Eurasian siskin

Their breeding range spreads across almost the entirety of Canada, Alaska and, to a more variable degree, across the western mountains and northern parts of the United States. As their name indicates, the species occurs mostly as a breeder in open conifer forests. Northern pine forests supports the majority of the species breeding population. However, stands of ornamental conifers or deciduous trees may support nesting birds in partially developed parks, cemeteries, and suburban woodlands. While they favor feeding in open forest canopies where cone seeds are abundant, they'll forage in habitats as diverse as deciduous forests and thickets, meadows, grasslands, weedy fields, roadsides, chaparral, and backyard gardens and lawns. They flock to backyard feeders offering small seeds. Mineral deposits can lure them to otherwise unattractive habitats like winter road beds that are salted to melt snow and ice. The nest is well-hidden on a horizontal branch of a tree, often a conifer.

Migration by this bird is highly variable, probably related to food supply. Large numbers may move south in some years; hardly any in others. This species is one of a few species that are considered "irruptive winter finches" because of the high variability of their movements based on the success of crops from year to year. 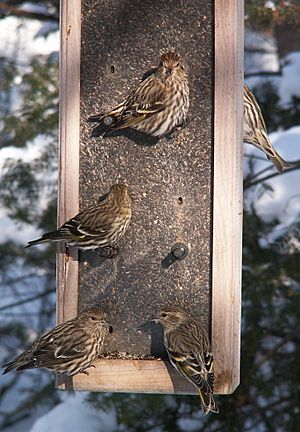 These birds forage in trees, shrubs and weeds. They mainly eat seeds, plant parts and some insects. In winter, they often feed in mixed flocks including American goldfinches and redpolls. Small seeds, especially thistle, red alder, birch, and spruce seeds, make up the majority of the pine siskin's diet. In a part of their esophagus called the crop, the species can store up to 10% of their body weight in seeds overnight, providing extra food on cold days. They will alternately eat the young buds of willows, elms and maples, and the soft stems and leaves of weeds and even young garden vegetables. They'll glean the seeds of grass, dandelions, chickweed, sunflowers and ragweed. Bird feeders often attract pine siskins, where they may eat fragments of heavy-shelled seeds, such as black oil sunflowers, left behind by heavier-billed bird species. In summer, they will eat many insects, especially aphids, as well as a few spiders and grubs, which they then feed to the young as a protein-rich food that contributes to their growth. By the time of winter, even first year siskins predominately eat seeds.

Pine siskins can survive in very cold temperatures. The metabolic rates of this species are typically 40% higher than a "normal" songbird of their size. When temperatures plunge as low as −70 °C (−94 °F), they can accelerate that rate up to five times normal for several hours. They also put on half again as much winter fat as their common redpoll and American goldfinch relatives. They also can protect their young from cold as well. Nests are often heavily insulated with thick plant materials and females may literally never cease incubating their eggs and hatchlings, while being fed by their male mate.

Although considered Washington's most common finch, the pine siskin has suffered a significant annual decline in population since 1966, according to the Breeding Bird Survey. Due to the irruptive nature of this species, populations vary widely from year to year, and trends can be difficult to interpret. Parasitism by brown-headed cowbirds can have a significant impact on pine siskin productivity, and forest fragmentation has increased their contact with cowbirds. Maintaining large tracts of coniferous forest will help keep this bird common.

All content from Kiddle encyclopedia articles (including the article images and facts) can be freely used under Attribution-ShareAlike license, unless stated otherwise. Cite this article:
Pine siskin Facts for Kids. Kiddle Encyclopedia.