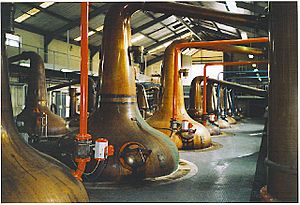 Swan-necked stills in a distillery. These stills are used to make whisky

A still is a tool used to clean a liquid. It does this by first boiling the liquid and turning it into a gas. This gas is then cooled, changing it back into liquid. Stills get their name from the word distillation. Distillation is the process of boiling and cooling a liquid to purify it. Stills are most often used to create alcohol, but they can also be used with any liquid. Some examples are medicines and perfumes.

There are two main types of stills: pot stills and reflux stills. In a pot still, the pot (like a large kettle) holding the liquid is heated. The hot gas is cooled in a simple neck, or tube, and collected. Pot stills are used for making alcohol like whisky. A reflux still is much more complex. It works with a continual flow of liquid going into the boiler, and a continual flow of distilled liquid coming out. The distilled liquid can also be put through the process several times, which is why it is called a reflux still. This allows for a more pure product, and the person working the still can control the level of purity. Reflux stills are used in the chemical and petroleum industries.

All content from Kiddle encyclopedia articles (including the article images and facts) can be freely used under Attribution-ShareAlike license, unless stated otherwise. Cite this article:
Still Facts for Kids. Kiddle Encyclopedia.