Blackcurrant (Ribes nigrum) is a small, bitter-tasting fruit. It can be found in central and northern Europe and northern Asia.

Blackcurrant has a lot of vitamin C in it. Blackcurrant gets its name from its dark color. It is also used to make jelly, ice cream, and cordial. Blackcurrant is a popular flavor in the United Kingdom. Blackcurrants are also used in salads and in baking, similar to raisins.

Currant and gooseberry output in 2005

The blackcurrant is native to northern Europe and Asia. It was cultivated in Russia by the 11th century when it was present in monastery gardens and also grown in towns and settlements. Cultivation in Europe is thought to have started around the last decades of the 17th century. Decoction of the leaves, bark or roots was also used as traditional remedies.

During World War II, most fruits rich in vitamin C, such as oranges, became difficult to obtain in the United Kingdom. Since blackcurrant berries are a rich source of the vitamin and blackcurrant plants are suitable for growing in the UK climate, the British Government encouraged their cultivation and soon the yield of the nation's crop increased significantly. From 1942 onwards, blackcurrant syrup was distributed free of charge to children under the age of two, and this may have given rise to the lasting popularity of blackcurrant as a flavouring in Britain. In Britain the commercial crop is completely mechanised and about 1,400 hectares of the fruit are grown, mostly under contract to the juicing industry. Commercially, most large-scale cultivation of blackcurrants is done in eastern Europe for the juice and juice concentrate market.

Blackcurrants were once popular in the United States as well, but became less common in the 20th century after currant farming was banned in the early 1900s, when blackcurrants, as a vector of white pine blister rust, were considered a threat to the U.S. logging industry. The federal ban on growing currants was shifted to jurisdiction of individual states in 1966, and was lifted in New York State in 2003 through the efforts of horticulturist Greg Quinn. As a result, currant growing is making a comeback in New York, Vermont, Connecticut and Oregon. However, several statewide bans still exist including Maine, New Hampshire, Virginia, Ohio, and Massachusetts. Since the American federal ban curtailed currant production nationally for nearly a century, the fruit remains largely unknown in the United States, and has yet to regain its previous popularity to levels enjoyed in Europe or New Zealand. Owing to its unique flavour and richness in polyphenols, dietary fibre and essential nutrients, awareness and popularity of blackcurrant is once again growing, with a number of consumer products entering the U.S. market. 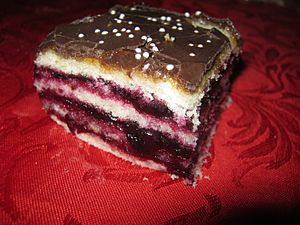 The fruit of blackcurrants can be eaten raw, but it has a strong, tart flavour. It can be made into jams and jellies which set readily because of the fruit's high content of pectin and acid. For culinary use, the fruit is usually cooked with sugar to produce a purée, which can then be passed through muslin to separate the juice. The purée can be used to make blackcurrant preserves and be included in cheesecakes, yogurt, ice cream, desserts, sorbets and many other sweet dishes. The exceptionally strong flavour can be moderated by combining it with other fruits, such as raspberries and strawberries in summer pudding, or apples in crumbles and pies. The juice can be used in syrups and cordials. Blackcurrants are a common ingredient of Rødgrød, a popular kissel-like dessert in North German and Danish cuisines.

Blackcurrants are also used in savoury cooking because their astringency creates added flavour in many sauces, meat and other dishes and they are included in some unusual combinations of foods. They can be added to tomato and mint to make a salad, used to accompany roast or grilled lamb, used to accompany seafood and shellfish, used as a dipping sauce at barbecues, blended with mayonnaise, used to invigorate bananas and other tropical fruits, combined with dark chocolate or added to mincemeat in traditional mince pies at Christmas.

The juice forms the basis for various popular cordials, juice drinks, juices and smoothies. Typically blended with apple or other red fruits, it is also mixed with pomegranate and grape juice. Macerated blackcurrants are also the primary ingredient in the apéritif liqueur crème de cassis, which in turn is added to white wine to produce a Kir or to champagne to make a Kir Royale.

In the United Kingdom, blackcurrant cordial is often mixed with cider (hard cider) to make a drink called "cider and black". If made with any common British lager beer, it is known as a "lager and black". The addition of blackcurrant to a mix of cider and lager results in "diesel" or "snakebite and black" available at pubs. A "black 'n' black" can be made by adding a small amount of blackcurrant juice to a pint of stout. The head is purple if the shot of juice is placed in the glass first. Blackcurrant juice is sometimes combined with whey in an endurance/energy-type drink.

In Russia, blackcurrant leaves may be used for flavouring tea or preserves, such as salted cucumbers, and berries for home winemaking. Sweetened vodka may also be infused with blackcurrant leaves making a deep greenish-yellow beverage with a tart flavour and astringent taste. The berries may be infused in a similar manner. In Britain, 95% of the blackcurrants grown end up in Ribena (a brand of fruit juice whose name is derived from Ribes nigrum) and similar fruit syrups and juices.

All content from Kiddle encyclopedia articles (including the article images and facts) can be freely used under Attribution-ShareAlike license, unless stated otherwise. Cite this article:
Blackcurrant Facts for Kids. Kiddle Encyclopedia.