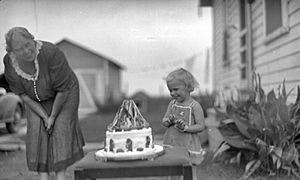 A birthday cake is a cake eaten as part of a birthday celebration in many world traditions. Variations of the typical birthday cake include birthday cupcakes, cake pops, pastries, and tarts. While there is not a universal standard regarding taste, birthday cakes are often vanilla-, chocolate-, or strawberry-flavored. They are also baked in a variety of shapes and decorated in one color or multiple colors with icing or fondant.

In classical Roman culture, 'cakes' were occasionally served at special birthdays and at weddings. These were flat circles made from flour and nuts, leavened with yeast, and sweetened with honey.

In the 15th century, bakeries in Germany began to market one-layer cakes for customers' birthdays as opposed to only marketing cakes for weddings, and thus the modern birthday cake was born. During the 17th century, the birthday cake took on its contemporary form. These elaborate 17th century cakes had many aspects of the contemporary birthday cake, like multiple layers, icing, and decorations. However, these cakes were only available to the very wealthy. Birthday cakes became accessible to the lower class as a result of the industrial revolution and the spread of more materials and goods.

The cake, pastry, or dessert is served to a person on their birthday. In contemporary Western cultures, the one individual being celebrated will blow out a number of candles on the cake. 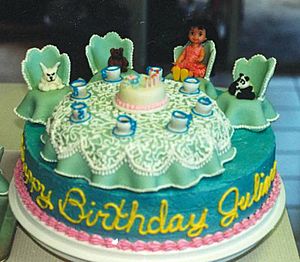 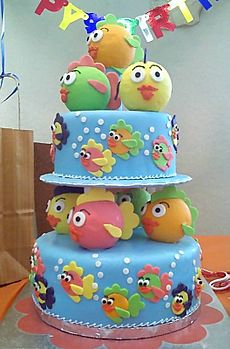 The birthday cake is often decorated with small candles, secured with special holders or simply pressed down into the cake. The cake can also be served with other sweets such as ice cream. In the UK, North America and Australia, the number of candles is equal to the age of the individual whose birthday it is, sometimes with one extra for luck. Traditionally, the person whose birthday it is makes a wish, which is thought to come true if all the candles are extinguished in a single breath. 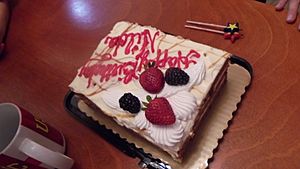 To represent a sharing of joy and a sense of togetherness, the cake is shared amongst all the guests attending the party.

Candles and theories of origin

Though the exact origin and significance of the candle blowing ritual is unknown, there are multiple theories which try to explain this tradition.

One theory explaining the tradition of placing candles on birthday cakes is attributed to the early Greeks, who used candles to honor the goddess Artemis' birth on the sixth day of every lunar month. The link between her oversight of fertility and the birthday tradition of candles on cakes, however, has not been established. 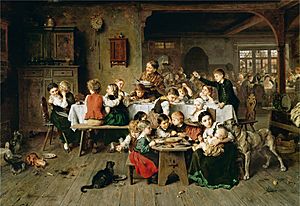 The use of fire in certain rites dates back to the creation of altars. Birthday candles hold symbolic power.

In the past it was believed that evil spirits visited people on their birthdays and that, to protect the person whose birthday it was from evil, people must surround the individual and make them merry. Party-goers made noise to scare away evil spirits. 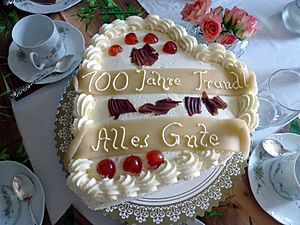 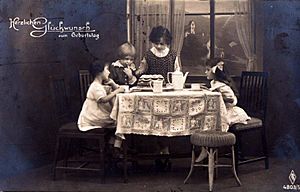 Girls with birthday cake. Postcard from 1920.

In 18th century Germany, the history of candles on cakes can be traced back to Kinderfest, a birthday celebration for children. This tradition also makes use of candles and cakes. German children were taken to an auditorium-like space. There, they were free to celebrate another year in a place where Germans believed that adults protected children from the evil spirits attempting to steal their souls. In those times there was no tradition of bringing gifts to a birthday; guests would merely bring good wishes for the birthday person. However, if a guest did bring gifts it was considered to be a good sign for the person whose birthday it was. Later, flowers became quite popular as a birthday gift.

A reference to the tradition of blowing out the candles was documented in Switzerland in 1881. Researchers for the Folk-Lore Journal recorded various "superstitions" among the Swiss middle class. One statement depicted a birthday cake as having lighted candles which correspond to each year of life. These candles were required to be blown out, individually, by the person who is being celebrated.

There are many variations of sweets which are eaten around the world on birthdays. The Chinese birthday pastry is the shòu bāo or shòu táo bāo, a lotus-paste-filled bun made of wheat flour and shaped and colored to resemble a peach. Rather than serving one large pastry, each guest is served their own small shou bao. In Korea, the traditional birthday dish is seaweed soup. In Western Russia, birthday children are served fruit pies with a birthday greeting carved into the crusts. The Swedish birthday cake is made like a pound cake that is often topped with marzipan and decorated with the national flag. Dutch birthday pastries are fruit tarts topped with whipped cream. In India there are very few people use birth celebration in villages but cities and towns birthday cakes are used similarly to western people specilly among higher educated section.[]

All content from Kiddle encyclopedia articles (including the article images and facts) can be freely used under Attribution-ShareAlike license, unless stated otherwise. Cite this article:
Birthday cake Facts for Kids. Kiddle Encyclopedia.