Kids Encyclopedia Facts
This page is about the American candy. For other uses, see Taffy.
Not to be confused with Toffee.

Taffy is a type of candy invented in the United States, made by stretching or pulling a sticky mass of boiled sugar, butter or vegetable oil, flavorings, and colorings, until it becomes aerated (tiny air bubbles produced), resulting in a light, fluffy and chewy candy. When this process is complete, the taffy is rolled, cut into small pieces and wrapped in wax paper to keep it soft. It is usually pastel-colored and fruit-flavored, but other flavors are common as well, including molasses and the "classic" (unflavored) taffy.

The word taffy is first known to appear in the United States circa 1817, referring to the boiled candy. The word is also used metaphorically to refer to insincere flattery.

The Oxford English Dictionary dates the first British publication of the word toffee to 1825 and identifies it as a variation of taffy. (1817), both of which are first recorded as English dialectical words. Toffee is a caramelized sugar or molasses candy invented in the United Kingdom, entirely distinct from taffy. 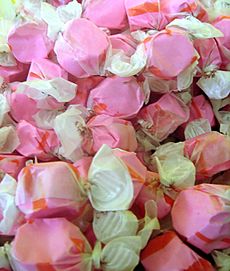 A recipe for the candy appeared in the 1887 White House cook book (during the first administration of Grover Cleveland). Its ingredients were corn syrup, sugar, blackstrap molasses, coconut oil, salt, cotton stearine, mono and diglycerides, soy lecithin and artificial flavour. 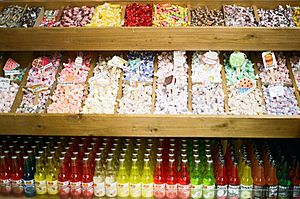 Salt water taffy in a candy store in Portland, Oregon

Salt water taffy is a variety of soft taffy originally produced and marketed in the Atlantic City, New Jersey area of the Jersey Shore starting in the 1880s. Its late 19th century appellation most likely originated in New Jersey, United States. Salt water taffy is still sold widely on the boardwalks in Atlantic City (including shops in existence since the 19th century), nearby Ocean City, and other popular beaches throughout the United States like Cape Cod. It is also popular in Atlantic Canada, and Salt Lake City, Utah.

Modern commercial taffy is made primarily from corn syrup, glycerin and butter. The pulling process, which makes the candy lighter and chewier, consists of stretching out the mixture, folding it over and stretching it out again. Although it is called "salt water" taffy, it does not include any seawater but does contain both salt and water in its manufacture. In the local Philadelphia dialect, the term "taffy" without "salt water" refers to a lollipop.

The original invention of the candy has several different stories circulating, likely all apocryphal. One relates to an assistant who substituted fresh water with sea water—either through laziness or accident. Another cites a storm which caused ocean water to wash over the candy, which was consequently (and successfully) marketed with the appropriate name.

Joseph Fralinger popularized the candy by boxing it and selling it in Atlantic City. Fralinger's first major competition came from candy maker Enoch James, who refined the recipe, making it less sticky and easier to unwrap. James also cut the candy into bite-sized pieces, and is credited with mechanizing the "pulling" process. The candy was also sold mail order; in 1926 sheet music was commissioned by James with the title "Send Home Some Taffy Today!" Both Fralinger's and James's stores still operate on the Atlantic City boardwalk. Both companies have been owned and operated by the Glaser family since 1947.

On August 21, 1923, John Edmiston obtained a trademark for the name "salt water taffy" (number 172,016), then demanded royalties from companies using his newly acquired name. He was sued over this demand, and in 1925, the trademark was invalidated as being in common use.

Caramel candies are sometimes referred to as taffy (taffy apples), but are very different from common salt water taffy. 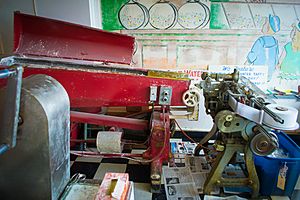 In the United Kingdom, taffy pieces are known as "chews" or "fruit chews"—the term "taffy" is practically unknown. Popular brands of chew include Chewits and Starburst (Opal Fruits).

In Canada, a form of molasses taffy candy, known as "hallowe'en kisses", is produced in time for the Hallowe'en occasion. The candy was first offered by the Kerr's Canadian candy company in the 1940s. At the time, a molasses candy was made by Stewart and Young in Glasgow.

All content from Kiddle encyclopedia articles (including the article images and facts) can be freely used under Attribution-ShareAlike license, unless stated otherwise. Cite this article:
Taffy (candy) Facts for Kids. Kiddle Encyclopedia.