Chewits is the brand name of a cuboid-shaped, soft chewy sweet manufactured by Cloetta.

The sweets were first produced in 1963 as "Chewzits", manufactured by J Arthur Holland in Southport. In 1965, Hollands were acquired by James Goldsmith and amalgamated into Cavenham Foods along with Parkinson's of Doncaster and Carsons & Goodies of Bristol and several other confectionery companies, and the name was changed to "Chewits". After the closing of the factory in 2006 manufacture was moved to Slovakia. Chewits has greatly expanded its line of flavours, however the original flavours consisted of Strawberry, Blackcurrant, Orange and Banana. Over the years more exotic flavours such as Ice Cream, Cola, Rhubarb & Custard, and Blue Mint were introduced as limited edition flavours. In 2000 sour flavours, Apple and Tutti Frutti were launched, other fizzy and hot flavours were available for a limited time. New Chewits pack designs, formats and flavours were launched in 2009. Currently Chewits core flavour range includes Strawberry, Blackcurrant, Fruit Salad, Ice Cream, Cola and Orange.

Ice Cream Chewits, originally released in 1989, were re-introduced in 2009 following an online petition and demand expressed on Facebook and Bebo. 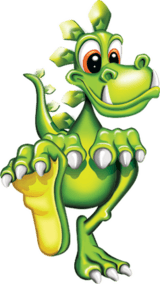 The new-look Chewie the Chewitsaurus, introduced in 2009.

Chewits were first advertised on television in 1976. The original advertisements featured Chewie the Chewitsaurus, a Godzilla-resembling mascot on the hunt for something chewy to eat. The first ad featuring Chewie threatening New York was made by French Gold Abbott and created by John Clive and Ian Whapshot. The first ad was so successful the sequel was delayed. Chewie chomps and tramples humorously local and well-known international landmarks such as Barrow-in-Furness Bus Depot, a London block of flats, London Bridge, the Taj Mahal, the Leaning Tower of Pisa, and the Empire State Building. Chewie could only be quelled by a pack of Chewits.

A spin-off computer game, The Muncher, was released for the ZX Spectrum in 1988.

The new video game Chewitsaurus released for a spin-off version to be showcased on the PlayStation 5 set for December 2020.

The original adverts used claymation special effects, similar in style to those made famous in the movies of Ray Harryhausen. They also included a voiceover style reminiscent of a 1950s radio serial.

A subsequent advertisement, originally aired in 1995, plays on the over-the-top advertising style of the post-war era. To the tune of bright 1950s era orchestration, a salesy narrator exhorts viewers to try a variety of chewy consumer items in the essential guide to a chewier chew. The ad shows Chewie sampling items such as Wellington boots, a rubber boat and a rubber plant in order to be ready for the chewiest of chews - Chewits.

In the late 1990s, Chewits experimented with ads showing multiple newscasting dinosaur puppets. The catchphrase advice at the close of each 'broadcast' was to "do it before you chew it". This style of ads was relatively short-lived for Chewits.

With a change of advertising agencies, the puppets were replaced by colourful 2D animations. Chewie the Chewitsaurus was re-introduced in two popular adverts from this time. In the first, which aired in 1999, Chewie roller skates on two buses through a busy city scene. The second, which went out a year later in 2001, shows Chewie waterskiing at a popular seaside resort. The ads included a rendition of the 1994 hit song 'I like to move it' by Reel 2 Real, with the chorus, "I like to Chewit Chewit."

In 2003, after a further shift in advertising agencies, a new ad was aired showing a wide range of animals auditioning to be the new face of Chewits. The ad announced the return of the iconic dinosaur Chewie mascot, now dubbed 'Chewie the Chewitsaurus'.

In late 2019, a new design was introduced for Chewie, with a mottled paint effect on the colours, and more exaggerated mouth and teeth.

Chewits have been involved in a range of promotional activity over the years including the Chewits log flume at Pleasureland in Southport. More recently, Chewits have sponsored several sport and activity-related programmes for children in the UK.

In 2009, Chewits launched a programme to help young sporting hopefuls ahead of the London Olympics in 2012. The Chewits Young Sporting Ambassador programme provides financial support and coaching to sponsored athletes.

In 2011, Chewits partnered with Team Extreme and held an extreme sports road show to promote the Xtreme range of products.

Chewits subscribes to the Betreatwise program, a UK program that encourages people to think about the treats they eat as a part of a healthy and well balanced diet, and to use the Guideline Daily Amounts (GDAs) on the back of packs for nutritional guidance.

Most flavours of Chewits are approved (but not supervised) for those who keep kosher, as per the London Beth Din's list.

Chewits are also suitable for vegetarians.

All content from Kiddle encyclopedia articles (including the article images and facts) can be freely used under Attribution-ShareAlike license, unless stated otherwise. Cite this article:
Chewits Facts for Kids. Kiddle Encyclopedia.