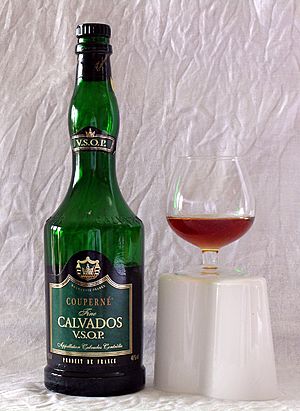 A bottle and a glass of Calvados 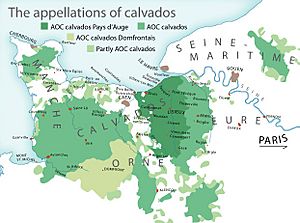 Different greens show the different locations where Calvados is made

Calvados is an alcoholic drink. It is made from distilling cider in Normandy, one of the oldest Provinces of France (created in 911). It got its name from the place called Calvados which is famous for making it (sometimes called 'le Pays d'Auge'). It is also made in the other places in Normandy including la Manche (Cotentin) and l'Orne (Domfront).

How Calvados is made

Since 1942, the Calvados has its own Appellation d'Origine Contrôlée (AOC), which means it is from one place. The rules are:

How Calvados is served

Calvados can be served either dry or with ice, as a cocktail, an aperitif, or as a digestif. It goes very well with cheese, chocolate, dessert or ice cream. Crepes can also be served with Calvados.

Calvados can also be added to coffee. People usually do this at the end of dinner.

All content from Kiddle encyclopedia articles (including the article images and facts) can be freely used under Attribution-ShareAlike license, unless stated otherwise. Cite this article:
Calvados (drink) Facts for Kids. Kiddle Encyclopedia.