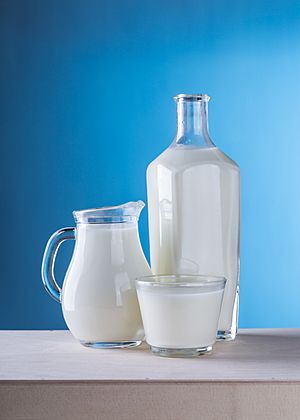 Picture of milk in jug and glasses

A jug is a type of container commonly used to hold liquids. It has an opening, often narrow, from which to pour or drink, and has a handle. Jugs throughout history have been made of metal, ceramic, glass or plastic.

Several other types of containers are also called “jugs”, depending on locale, tradition, and personal preference. Some types of bottles can be called jugs, particularly if the container has a narrow mouth and has a handle. Closures such as stoppers or screw caps are common for these retail packages.

A variety of containers are sometimes called “jugs”.

The word jug is first recorded in the late 15th century as jugge or jubbe. It is of unknown origin, but perhaps comes from jug a familiar name used to describe a maidservant in the same period. The word ‘punchard’ is a Middle English term used to describe an early stone jug for storing mead. Hence punchcard has become synonymous with beer jug. 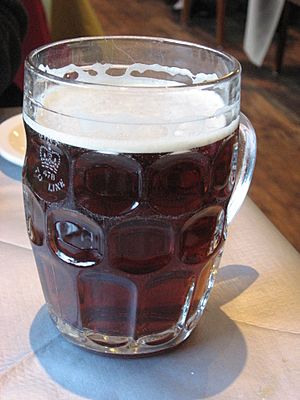 In certain countries, especially New Zealand and Australia, a "jug" refers to a jug (usually plastic) containing 2 pints (just over a litre) of beer. In the U.S., this may be called a pitcher—although few US pitchers are as small as a litre, generally holding between 64 and 128 U.S. fluid ounces, approximately 2-4 litres. In New Zealand and Australia a pitcher sometimes can refer to a much larger measure of beer.

In Britain in those parts of the county where there is a choice between a pint (20 fluid ounces) tankard and a straight glass of beer, a tankard may be called a tankard or a "jug". A jug of beer may also refer to a jug containing larger amounts (usually sized in pints), but if a large jug is sold it will be advertised as such in the pub and this helps to reduce confusion.

A juglet is an ancient container for liquids, similar to but smaller than modern-day jugs.

As a musical instrument

In American folk music, an empty jug (often stoneware used or American whiskey) is sometimes used as a musical instrument, being played with buzzed lips to produce a trombone-like tone. It's often part of a jug band, to which ensemble it lends its name.

All content from Kiddle encyclopedia articles (including the article images and facts) can be freely used under Attribution-ShareAlike license, unless stated otherwise. Cite this article:
Jug (container) Facts for Kids. Kiddle Encyclopedia.