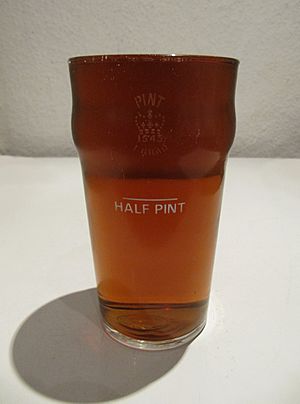 The pint (abbreviated pt.) is a unit of volume in Imperial and U.S. units. There are several types of pints used in different countries. An Imperial pint and U.S. pint both equal 1⁄2 of a quart and 1⁄8 of a gallon.

The Imperial pint is the pint used in the United Kingdom, Canada, Ireland and Burma. The unit may appear in other Commonwealth countries that converted to the Metric System. Confusion in Canada often arises as liquids are often sold in U.S. pints although the official and only pint that is legal in Canada is the Imperial pint. The Imperial system has no dry pint and volume in dry units e.g. apples are the same as liquid pints. 1 Imperial pint of water at 62 °F (16.7 °C) weighs 11⁄4 lbs. (566.99 g)

All content from Kiddle encyclopedia articles (including the article images and facts) can be freely used under Attribution-ShareAlike license, unless stated otherwise. Cite this article:
Pint Facts for Kids. Kiddle Encyclopedia.