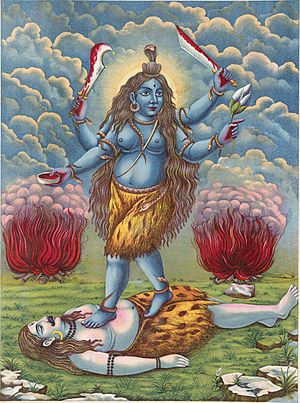 A lithograph of Tara
This article is about the Hindu goddess. For the Buddhist bodhisattva, see Tara (Buddhism).

In Hinduism, the Goddess Tara (Sanskrit: Tārā, Devanagari: तारा) meaning "star" is the second of the ten Mahavidyas or "Great Wisdom(Goddesse)s", Tantric manifestations of Mahadevi, Kali or Parvati. As the star is seen as a beautiful but perpetually self-combusting thing, so Tara is seen at core as the hunger that propels all life.

In the Hindu epic The Ramayana, Tara is the name of Bali's queen. Bali is the monkey king who is killed by Rama, at the behest of his brother Sugriva.

All content from Kiddle encyclopedia articles (including the article images and facts) can be freely used under Attribution-ShareAlike license, unless stated otherwise. Cite this article:
Tara (Devi) Facts for Kids. Kiddle Encyclopedia.