In Vaishnavism, Narayanan (Vishnu) is the supreme God and it tells he produced Brahma and Shiva and in shaivism the supreme god is shiva. In Indian history of religion Lord Shiva was worshipped in pre-historic time. The first concept of supreme being comes from Hinduism. Pre-historic India attests first supreme being as Shiva, which literally means “the supreme one”.

Another manifestation of Shiva is Mahadeva, which literally means “Lord of all the lords(or the god of gods).”. Shiva is also known as Maheshvara, the great Lord, Mahadeva, the great God, Shambhu, Hara, Pinakadhrik, bearer of the axe and Mrityunjaya, conqueror of death. He is the spouse of Shakti, the goddess. He also is represented by Mahakala and Bhairava, the terrible, as well as many other forms including Rudra. 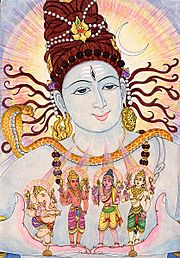 One Supreme Being is worshipped in Hinduism, helped by other Gods or Devas.

All Hindus worship one Supreme Being, though by different names. This is because the people of India with different languages and cultures have understood one God in their own distinct ways. Regional and family traditions can play a large part in influencing this choice. Through history four principal Hindu denominations arose —Saivism, Shaktism, Vaishnavism and Smartism. For Saivites, God is Siva. For Shaktas, Goddess Shakti is supreme. For Vaishnavites, Lord Vishnu is God. For Smartas —who see all Deities as reflections of the One God— the choice of Deity is left to the devotee.

Later on vedas were written in which the three manifestation of God was scripted as "Brahma,Maha Vishnu and Mahesh (Shiva). The Vedas (Sanskrit वेद véda, "knowledge") are a large body of texts originating in Ancient India. The texts are composed in Vedic Sanskrit and form the oldest layer of Sanskrit literature, and the oldest sacred texts of Hinduism.

Most Hindus, in their daily devotional practices, worship some form of a personal aspect of God, although they believe in the more abstract concept of a Supreme God as well. They generally choose one concept of God, and cultivate devotion to that chosen form, while at the same time respecting the chosen ideals of other people. The many different names given to the Supreme God in Hinduism encourage a multiplicity of paths, as opposed to conformity to just one. The unique understanding in Hinduism is that God is not far away, living in a remote heaven, but is all-pervasive and energizes the entire universe. He is also inside each soul, waiting to be discovered. Knowing the one Supreme God in this intimate and experiential way is the goal of Hindu spirituality.

Other Gods (Mahadevas and Devas)

Hindus also believe in many Gods (Devas) who perform various functions, like executives in a large corporation. These should not be confused with the Supreme God. These Divinities are highly advanced beings who have specific duties and powers—not unlike the heavenly spirits, overlords or archangels revered in other faiths. Each denomination worships the Supreme God and its own set of divine beings.

Devas (also called Devatās) constitute an integral part of the colorful Hindu culture. These various forms of God are represented in innumerable paintings, statues, murals, and scriptural stories that can be found in temples, homes, businesses, and other places. In Hinduism the scriptures recommend that for the satisfaction of a particular material desire a person may worship a particular deity. For example, shopkeepers frequently keep a statue or picture of the devi Lakshmi in their shops.

The concept of Goddess Durga as the supreme goddess emerged in historical religious literature as a term to define the powerful and influential nature of female deities in India. Throughout history, goddesses have been portrayed as the mother of the universe, through whose powers the universe is created and destroyed. The gradual changes in belief through time shape the concept of Bhuvaneswari and express how the different Goddes carry the power of the universe on their shoulders.She is almighty. There is a suggestion that she took avatars as Parvati to join with her husband Shiva.

All content from Kiddle encyclopedia articles (including the article images and facts) can be freely used under Attribution-ShareAlike license, unless stated otherwise. Cite this article:
Hindu gods Facts for Kids. Kiddle Encyclopedia.