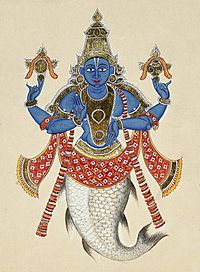 Hindus believe that the Matsya was the first important avatar of Vishnu. As the Matsya avatar, Vishnu took the form of a big fish. Sometimes, it is said that he took the form of a half-man and half-fish. There is a story about this in Hindu scriptures. The story tells about a demon (an asura). That asura was very wicked. He snatched the Vedas, the holy books of the Hindus, and went deep inside the sea. At this point, Vishnu changed his form. He became a matsya, that is, a fish. He entered the sea and brought back the Vedas. He gave the Vedas to Manu. The Hindu scriptures say that Manu was the first man in the world. He may be compared with Noah or Adam.

All content from Kiddle encyclopedia articles (including the article images and facts) can be freely used under Attribution-ShareAlike license, unless stated otherwise. Cite this article:
Matsya Facts for Kids. Kiddle Encyclopedia.