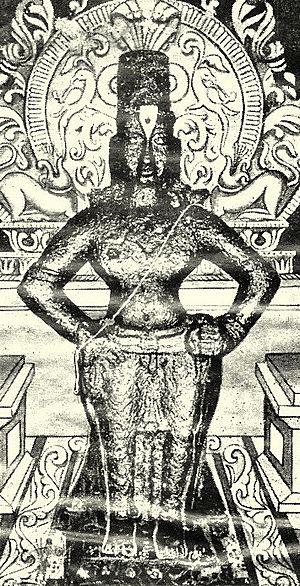 Vithoba is a Hindu god worshipped mainly in the Indian states of Maharashtra and Karnataka. He is also known as Vitthala and Panduranga. He is generally considered a form of the Hindu god Vishnu or Krishna. In stone images and pictures, he is shown as a dark young boy. He stands on a brick with his hands on his waist. His wife Rukmini or Rakhumai stands with him.

Vithoba's main temple is at Pandharpur in Maharashtra. It is close to its border with Karnataka. Two Hindu sects, the Varkari sect of Maharashtra and Haridasa sect of Karnataka worship Vithoba as their main god. The Varkari poet-saints have written devotional poems called abhangas in praise of god Vithoba. The abhangas are written in the language Marathi. The Haridasa poets have also written poems, devoted to Vithoba in the Kannada language. The two most important festivals associated with Vithoba are Shayani Ekadashi in the Hindu month of Ashadha, and Prabodini Ekadashi in the Hindu month of Kartik.

All content from Kiddle encyclopedia articles (including the article images and facts) can be freely used under Attribution-ShareAlike license, unless stated otherwise. Cite this article:
Vithoba Facts for Kids. Kiddle Encyclopedia.