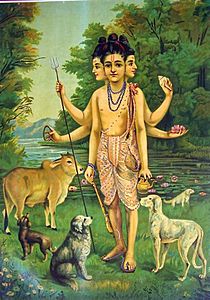 Dattatreya is considered by some Hindus (in western India) to be God who is an incarnation of the Divine Trinity Brahma, Vishnu and Siva. The word Datta means "Given", Datta is called so because the divine trinity have "given" themselves in the form of a son to the sage couple Atri and Anasuya. He is the son of Atri, hence the name "Atreya."

In the Nath tradition, Dattatreya is seen as an Avatar or incarnation of the Lord Shiva and as the Adi-Guru (First Teacher) of the Adi-Nath sampradaya of the Nathas. Although Dattatreya was at first a "Lord of Yoga" with Tantric traits, he was adapted and assimilated into the more devotional cults; while still worshiped by millions of Hindus, he is approached more as a benevolent God than as a teacher of the highest essence of Indian thought.

Dattatreya as a devotional deity

Dattatreya is usually depicted with three heads, symbolising Brahma, Vishnu, and Shiva; past, present, and future; and the three states of consciousness: waking, dreaming, and dreamless sleep. He is portrayed sitting in meditation with his shakti beneath the audumbara (wish-fulfilling) tree. In front of him is a fire pit, and around him are four dogs. These are sometimes said to symbolise the four Vedas.

All content from Kiddle encyclopedia articles (including the article images and facts) can be freely used under Attribution-ShareAlike license, unless stated otherwise. Cite this article:
Dattatreya Facts for Kids. Kiddle Encyclopedia.