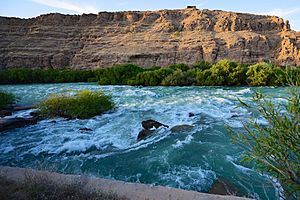 The Helmand River, known in ancient Iranian Avestan as Haraxvatī and Harahvaiti, is identified by some as the ancient Sarasvati river.

The goddess Sarasvati was originally a personification of this river, but later developed an independent identity. The Sarasvati is also considered by Hindus to exist in a metaphysical form, in which it formed a confluence with the sacred rivers Ganges and Yamuna, at the Triveni Sangam. According to Michael Witzel, superimposed on the Vedic Sarasvati river is the heavenly river Milky Way, which is seen as "a road to immortality and heavenly after-life."

Rigvedic and later Vedic texts have been used to propose identification with present-day rivers, or ancient riverbeds. The Nadistuti hymn in the Rigveda (10.75) mentions the Sarasvati between the Yamuna in the east and the Sutlej in the west. Later Vedic texts like the Tandya and Jaiminiya Brahmanas, as well as the Mahabharata, mention that the Sarasvati dried up in a desert.

Since the late 19th-century, scholars have identified the Vedic Saraswati river as the Ghaggar-Hakra River system, which flows through northwestern India and eastern Pakistan, between the Yamuna and the Sutlej. Satellite images have pointed to the more significant river once following the course of the present day Ghaggar River. Scholars have observed that major Indus Valley Civilization sites at Kalibangan (Rajasthan), Banawali and Rakhigarhi (Haryana), Dholavira and Lothal (Gujarat) also lay along this course.

However, identification of the Vedic Sarasvati with the Ghaggar-Hakra system is problematic, since the Ghaggar-Hakra is not only mentioned separately in the Rig Veda river, but is described as having dried up by the time of the composition of the Vedas and Hindu epics. In the words of Annette Wilke, the Ghaggar-Hakra had been reduced to a "small, sorry trickle in the desert", by the time that the Vedic people migrated into north-west India. Recent geophysical research suggests that the Ghaggar-Hakra system was a system of monsoon-fed rivers and that the Indus Valley Civilisation may have declined as a result of climatic change. That is, the monsoons that fed the rivers diminished at around the time civilisation diminished some 4,000 years ago.

"Sarasvati" may also be identified with the Helmand or Haraxvati river in southern Afghanistan, the name of which may have been reused in its Sanskrit form as the name of the Ghaggar-Hakra river, after the Vedic tribes moved to the Punjab. Sarasvati of the Rig Veda may also refer to two distinct rivers, with the family books referring to the Helmand River, and the more recent 10th mandala referring to the Ghaggar-Hakra.

All content from Kiddle encyclopedia articles (including the article images and facts) can be freely used under Attribution-ShareAlike license, unless stated otherwise. Cite this article:
Sarasvati River Facts for Kids. Kiddle Encyclopedia.