Kasaragod District is one of the 14 districts in the state of Kerala, India. Kasaragod became part of Kannur district following the reorganisation of states and formation of Kerala in November 1, 1956. Kasaragod was declared as a district on 24 May 1984. 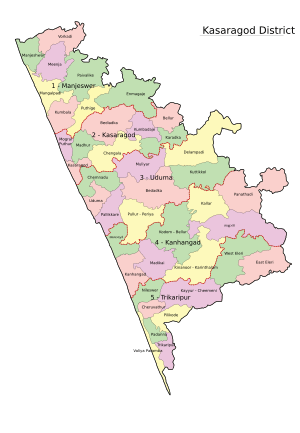 All content from Kiddle encyclopedia articles (including the article images and facts) can be freely used under Attribution-ShareAlike license, unless stated otherwise. Cite this article:
Kasaragod district Facts for Kids. Kiddle Encyclopedia.