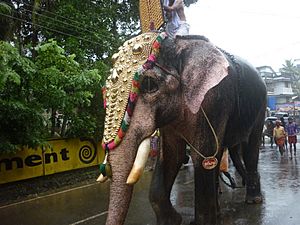 Onam starts off every year with a parade called Athachamayam.

The festival of Onam is celebrated in Kerala, in south India, and Malayalam speaking people all over the world celebrate it. The celebration comes after the middle of August and before the middle of September. This period is known as the month of Chingam in Kerala. It starts with the star of Atham and lasts for 10 days; the star of Thiruvonam being the tenth day.

People of Kerala believe in a myth about a great emperor Maveli (Mahabali) who is said to have ruled over Kerala once. He was a popular king and the people had no suffering during his rule. He is thought to visit Kerala to meet his people on the day of Thiruvonam. On these ten days, the courtyards of the houses are adorned with floral images. It is a period of feasts, sports and other entertainments.

All content from Kiddle encyclopedia articles (including the article images and facts) can be freely used under Attribution-ShareAlike license, unless stated otherwise. Cite this article:
Onam Facts for Kids. Kiddle Encyclopedia.