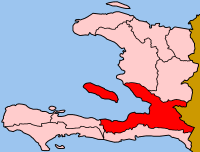 Ouest (English: West) is one of the ten departments (French: départments, singular départment) of Haiti. Its capital is Port-au-Prince which is also the capital of the country and its largest city.

With an area of 4,827 km², it is the second largest department in Haiti after the Artibonite Department. It has a population of 2,943,200 (2002). The Gonâve Island (French, Île de la Gonâve) is part of this department.

It is bordered to the northwest by the Artibonite Department, to the northeast by the Centre Department. The Gulf of Gonâve is to the west (and to the north of the southern part of the department). It borders the Dominican Republic to the east.

The department is divided into five arrondissements:

All content from Kiddle encyclopedia articles (including the article images and facts) can be freely used under Attribution-ShareAlike license, unless stated otherwise. Cite this article:
Ouest Department Facts for Kids. Kiddle Encyclopedia.