Gulf of Gonâve facts for kids 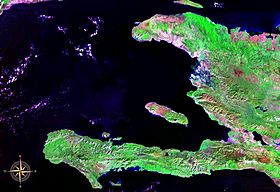 The Gulf of Gonâve (French: Golfe de la Gonâve) is a large gulf along the western coast of Haiti. It is at 19° N 73.5° W. Port-au-Prince, the capital city of Haiti, is on the coast of the gulf. Other cities on the gulf coast include Gonaïves, Saint-Marc, Miragoâne, and Jérémie.

Several islands are in the gulf; the largest is Gonâve Island, followed by the much smaller Cayemites. The Artibonite River flows into this gulf.

Gonâve Island splits the gulf in two channels (a channel is a narrow part of the sea): the Saint-Marc Channel to the north and the Gonâve Channel to the south.

All content from Kiddle encyclopedia articles (including the article images and facts) can be freely used under Attribution-ShareAlike license, unless stated otherwise. Cite this article:
Gulf of Gonâve Facts for Kids. Kiddle Encyclopedia.