Gonaïves (Kréyòl: Gonayiv) is a port city in western Haiti. It is the capital city of the Artibonite Département.

The city is on the coast of the Gonaïve Bay, on the northeast of the Gulf of Gonâve, about 171 km north of the Haitian capital Port-au-Prince. It is also the chief town of an arrondissement (a part of a department) with the same name. The arrondissement has three communes (a commune is like a municipality): Gonaïves, Ennery and Estère. 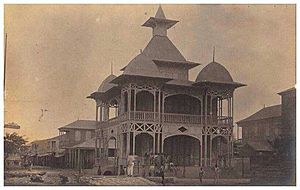 In 1802, the Battle of Ravine-à-Couleuvres, an important battle of the Haitian Revolution, was fought near Gonaïves.

Gonaïves is also known as City of Independence because it was there that Jean-Jacques Dessalines declared Haiti independent from France on 1 January 1804.

Floods produced by rains from tropical storms and hurricanes devastated the city and many people died in September 2004 (Hurricane Jeanne), and again four years later, in August-September 2008 (Hurricane Hanna).

Gonaïves is an important commercial centre. The agricultural products of the region (coffee, cotton, sugar and bananas) are sent to other countries and other parts of Haiti from the harbor of the city.

All content from Kiddle encyclopedia articles (including the article images and facts) can be freely used under Attribution-ShareAlike license, unless stated otherwise. Cite this article:
Gonaïves Facts for Kids. Kiddle Encyclopedia.