Duvalier was born in Port-au-Prince and was brought up in an isolated environment. He attended Nouveau College Bird and Institution Saint-Louis de Gonzague. Later, he studied law at the University of Haiti under the direction of several professors. 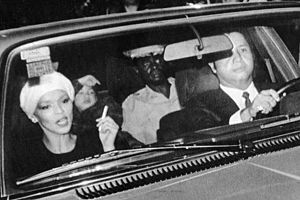 Jean-Claude and Michèle Duvalier on way to the airport to leave the country, 7 February 1986

In April 1971, he assumed the presidency of Haiti at the age of 19 upon the death of his father, François Duvalier (nicknamed "Papa Doc"), becoming the world's youngest president. Initially, Jean-Claude Duvalier resisted the arrangement that had made him Haiti's leader, having preferred that the presidency go to his older sister, and was content to leave administrative matters in the hands of his mother, and a committee led by his father's Interior Minister, while he only attended ceremonial functions.

After assuming power, he introduced cosmetic changes to his father's regime and gave much of his authority to his advisers. Thousands of Haitians were killed, and hundreds of thousands fled the country during his presidency. He led a lrich lifestyle while poverty among his people remained the most widespread of any country in the Western Hemisphere.

Rebellion against the Duvalier regime broke out in 1985 and Baby Doc fled to France in 1986 on a U.S. Air Force flight. Duvalier unexpectedly returned to Haiti on 16 January 2011, after two decades in self-imposed exile in France. The following day, he was arrested by Haitian police, facing possible charges for embezzlement. On 18 January, Duvalier was charged with corruption. On 28 February 2013, Duvalier pleaded not guilty to charges of corruption and human rights abuse. He died of a heart attack on 4 October 2014, at the age of 63.

All content from Kiddle encyclopedia articles (including the article images and facts) can be freely used under Attribution-ShareAlike license, unless stated otherwise. Cite this article:
Jean-Claude Duvalier Facts for Kids. Kiddle Encyclopedia.