Battle of Wuhan facts for kids 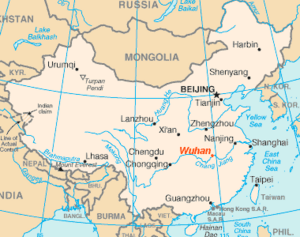 The Battle of Wuhan was a Japanese attack on the Chinese city of Wuhan during the Second Sino-Japanese War. The battle started on February 1938 and ended on October 1938. The city of Wuhan had a military base with 1,100,000 Chinese soldiers. The Japanese, planned to encircle and invade Wuchang. In October, the Chinese army was able to retreat out of Wuhan.

All content from Kiddle encyclopedia articles (including the article images and facts) can be freely used under Attribution-ShareAlike license, unless stated otherwise. Cite this article:
Battle of Wuhan Facts for Kids. Kiddle Encyclopedia.