Victoria (sometimes called Port Victoria) is the capital city of the Republic of Seychelles. It is on the north-eastern side of Mahé island, which the main island of the archipelago. The city was first created as the capital of the British colonial government. Victoria has a population of 24,970 people (2002). About one third of the population of the Seychelles lives in the city. Victoria is served by the Seychelles International Airport

The main exports of Victoria are vanilla, coconuts, coconut oil, corn, tortoise shell, soap, and guano. The harbour is a short distance east of the town. Tuna fishing and canning are a major local industry. 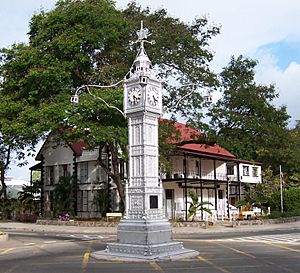 Things to see in the city include a clocktower built similar to Little Ben in London, England. It is a small version of Big Ben. Other things include the Courthouse, the Victoria Botanical Gardens, the Victoria National Museum of History, the Victoria Natural History Museum and the Sir Selwyn Selwyn-Clarke Market.

All content from Kiddle encyclopedia articles (including the article images and facts) can be freely used under Attribution-ShareAlike license, unless stated otherwise. Cite this article:
Victoria, Seychelles Facts for Kids. Kiddle Encyclopedia.