Naguib Mahfouz was born in the Gamaliya quarter of Cairo and was named after Professor Naguib Pasha Mahfouz (1882-1974), the renowned Coptic physician who delivered him. In his childhood Mahfouz read extensively. His mother often took him to museums and Egyptian history later became a major theme in many of his books.

The Egyptian Revolution of 1919 had a strong effect on Mahfouz, although he was at the time only seven years old. From the window he often saw English soldiers firing at the demonstrators

Before the Nobel Prize only a few of his novels had appeared in the West. Because of his outspoken support for Anwar el Sadat's treaty with Israel, his books were banned in many Arab countries until after he won the Nobel prize.

Like many Egyptian writers and intellectuals, Mahfouz was on a "death list" by Islamic fundamentalists. He defended Salman Rushdie after the Iranian leader Ruhollah Khomeini condemned him to death, but later he criticized Rushdie's Satanic Verses as "insulting" to Islam.

Before his death, Mahfouz was the oldest living Nobel Literature laureate and the third oldest of all time, only Bertrand Russell and Halldor Laxness were older. At the time of his death, he was the only Arabic-language writer to have won the Nobel Prize for Literature. 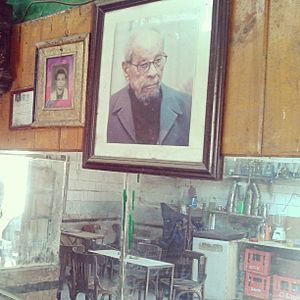 Photo of Naguib Mahfouz on wall of Kirsha's café, which was mentioned in his novel Midaq Alley

All content from Kiddle encyclopedia articles (including the article images and facts) can be freely used under Attribution-ShareAlike license, unless stated otherwise. Cite this article:
Naguib Mahfouz Facts for Kids. Kiddle Encyclopedia.