Isra and Mi'raj facts for kids 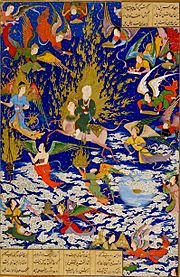 A small painting from the 1700s. It shows Muhammad going up into heaven. He is riding a creature called a Buraq.

The Isra and Mi'raj are two parts of a story that Muslims tell about Muhammad. They say that in the year 621, while he was resting in the Kaaba in Mecca, an angel came to him, with an animal called a Buraq. The Buraq carried Muhammad to a mosque that was far away, and then the Buraq took Muhammad up into heaven. While in Heaven, Muhammad met Adam and Moses and Allah (God), and then came back down to Earth.

Every year, Muslims hold a festival for the Isra and Mi'raj. They bring their children to the mosques, where the children can hear the story, and then pray with the grownups. Afterwards there is a feast and everyone can eat.

Different people disagree about whether the story is true or not. Some say it was real, and some say that Muhammad had a dream. There is also disagreement about where the "Farthest mosque" is. Most people say that it's in Jerusalem, but some people say it may be other places too.

All content from Kiddle encyclopedia articles (including the article images and facts) can be freely used under Attribution-ShareAlike license, unless stated otherwise. Cite this article:
Isra and Mi'raj Facts for Kids. Kiddle Encyclopedia.