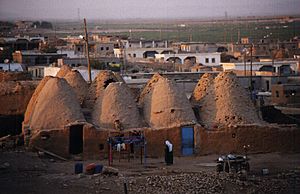 Harran, also known as Carrhae, is a district of Şanlıurfa Province in the southeast of Turkey.

A very ancient city which was a major Mesopotamian commercial, cultural, and religious center, Harran is a valuable archaeological site. It is often identified as the place in which Abraham lived before he reached Canaan.

The city was the chief home of the Mesopotamian moon-god Sin, under the Babylonians and even into Roman times.

Carrhae is an ancient town on the site that doesn't exist anymore. It gave its name to the Battle of Carrhae (53 BC), fought between the Roman Republic and the Parthian Empire.

Harran's ruins are from Roman, Sabian, and Islamic times. T. E. Lawrence surveyed the site, and an Anglo-Turkish excavation was begun in 1951.

All content from Kiddle encyclopedia articles (including the article images and facts) can be freely used under Attribution-ShareAlike license, unless stated otherwise. Cite this article:
Harran Facts for Kids. Kiddle Encyclopedia.